The old post-war world order has gone away but a new one is still missing: the global-scale turbulence will increase – such is one of the conclusions from a two-day discussion during the 72nd annual “Gallup International” conference which just ended in Vienna. Over a hundred participants from over fifty countries were greeted by the president of the World Association for Public Opinion Research (WAPOR) Marita Carballo. 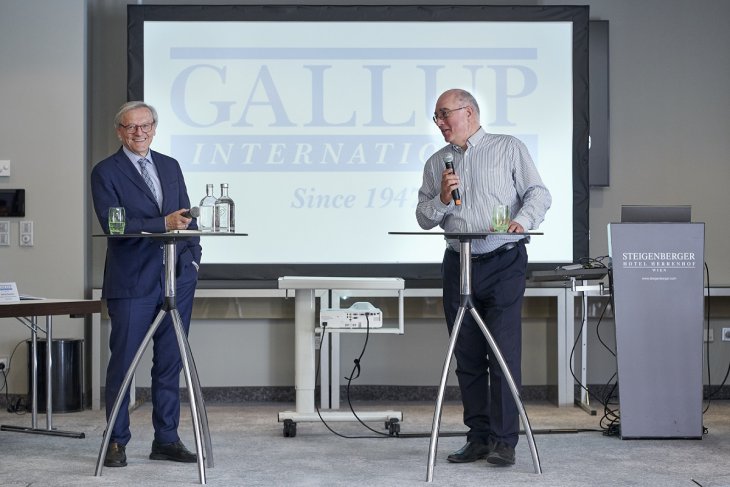 The Forum was officially launched by the President of the Association, the Bulgarian sociologist Kantcho Stoychev. A brilliant analysis of the situation across the world and in the EU in particular was made by one of the most prominent rightist politicians today: Dr. Wolfgang Schuessel, a long-time Chancellor of Austria.

Eric Frey, Editor-in-Chief of the authoritative media “Der Standard”, participated in a discussion with Fyodor Lukiyanov, chair of the Presidium of the Russian Council for Foreign and Defense Policy.

Substantial interest was provoked by the presentation “China at Crossroads” by the Vice-President of the Shanghai Center for Strategic and International Research Nelson Wong who also presented the strategic vision of the project “Belt and Road”.

Antonis Papacostas of the European Commission on his turn shared results from a survey on the entry of populist political parties in the upcoming European Parliament elections. The US researcher David Jodice outlined the perspectives of the political process in the United States.

Andrey Raychev introduced the participants with his conception for the future of the European Union and for the three illnesses of its present which provoked a heated debate.

Antonio Ascenio of SIGMADOS gave first summaries of the just conducted elections in Spain. Мункит Дахер showed the development of mass attitudes in Iraq since the end of the invasion.

Presentations from Africa, the Philippines, Latin America emphasized the multi-faceted development of democracy. This year as usual, a special panel was devoted to technologies and methods: artificial intelligence, big data and eye tracking, etc.

The conference of the oldest and most influential association of public opinion and market researchers concluded with a reception in one of the landmark Austrian palaces, Cobourg, followed by a concert of classic Viennese music.