Gallup International > Publications > Domestic Policy > Second Wave of Global Polling. Around the Globe: Worries about the Disease and Poverty. Support for the Authorities. Same in Bulgaria with some Important Specifics

Global concern about the spread of the Coronavirus is growing. In addition, worries of an economic and social crisis are deepening. Majorities stay supportive of their governments in the fight against the disease and are even ready to sacrifice specific rights.

These are some of the conclusions from the second “snap poll” held by the world’s longest running global polling network, Gallup International Association. The survey was carried out in 17 countries around the world including Germany, India, Italy, Russia, USA, etc and ended just days ago. The first wave was in March. All results are available at www.gallup-international.com.

Over the last few weeks fear of catching the Coronavirus has increased in almost all of the surveyed countries. For instance, with the spread of the virus in the USA the share of those who express their worries that they or a member of their family may actually catch the Coronavirus has increased by 25 points. More people are afraid now in Thailand, Switzerland, Argentina, Austria, Japan.

On the contrary, it turns out that the population in Italy has become more accustomed to the situation, as now the share of concerns about catching the virus has decreased by 9 points. It seems that Italian society has overcome the peak values of fear.

The highest share of dissatisfaction with the authorities in regard to the Covid-19 situation is registered again in Thailand – 81% disagree that their government is doing well with the current situation. Negative sentiment has increased by 5 points within a few weeks. The second place in terms of dissatisfaction remains Japan – 69% disagree that the authorities are handling the situation well (increase by 7 points). Public opinion in USA is rather divided – 48% are satisfied with the state measures and 48% are not.

Almost two thirds (63%, up from 59%) of respondents around the world do not think that the threat of the Coronavirus is exaggerated. One third (down from 38%) however still believe the opposite. 4% cannot decide.   With a global spread of the virus and corresponding government measures our survey shows that more and more people accept the threat is real.

The increased threat has impacted our willingness to sacrifice some of our human rights if this helps to prevent the spread of the infection.  In March 75% of the population surveyed were willing to sacrifice their human rights until the threat from Covid-19 has gone. This share now equals 80%

What comes after the crisis? Public opinion is yet not clear. 41% of the population in the surveyed countries are expecting the world to return more or less to its pre-crisis state. However, 45% think that there will be major change with an almost entirely new world after the Coronavirus crisis is over. 14% cannot answer.

Half of the population of the surveyed countries expect relations between the major world powers to become more cooperative. 28% express the opposite opinion – that relations will become more confrontational. The remaining 22% are unsure.

One third however say that the crisis has not impacted their lives so far in terms of jobs and income. The largest shares in this regard are registered in Austria, Germany and Japan.

What about the role of democracy in the crisis?  17% share the opinion that democracy is not effective in the current crisis. The highest levels of approval for this provocative statement are registered in Pakistan (49%), Malaysia (43%) and Russia (32%). Yet even here the majority do not share this opinion.   In countries including Austria, Argentina, Germany, Kazakhstan, Switzerland and India more than 90% of respondents disagree.  Democratic principles show signs of endurance in these difficult times.

“This panic we see, unprecedented in modern times, is a culmination of a series of mass fears on a global scale in the last two decades.  The underlying reasons of that mass psychosis are founded in the essence of the consumerist societies and the way the elites are servicing them.  The situation now resembles “ a suicide of a  civilization “ so convincingly described  by Arnold Toynbee.

The way out of the horror film we live in requires a happy end – in this case a vaccine.  But the major problem is that by the time the vaccine is widely available the economic devastation could be of such magnitude that a much bigger real tragedy might occur.”

As noted, two weeks ago, in Bulgaria the government measures are very well accepted, even when compared to the rest of the world, but the concerns about losing jobs are growing. The threat of the disease is taken noticeably more seriously now, than a month ago (although it seems that the concerns have stopped growing – as was reported few days ago). Yet, the Bulgarians remain one of the societies that doubt the significance of the threat. Bulgarians are willing to sacrifice some of their human rights, yet it seems that we have past the peak of that readiness – when compared to the world. The hope for a better tomorrow is preserved, but we are preparing for major changes in it.

69% of the adult Bulgarians are more or less afraid, that they or they family may actually catch the coronavirus. In this regard Bulgarians are close to the average values for the world. In the previous wave of the international survey – just before the growth of the infected and the beginning of the emergency measures in our country – this share was similar, but slightly lower. Month ago, our society did not yet realize the possible magnitude of the threat. Days ago, the newest wave of the national survey showed that now the anxiety equals 68%, i.e. for the moment it stops increasing.

The government measures in Bulgaria are still highly evaluated – 77% positive attitudes registered in the international survey (and a similar result of 75% registered in the national survey just a few days ago). Right before the introduction of the state of emergency this share was 60%.  With this growth for a month. Bulgaria is among the countries where the confidence in the authorities has increased the most after the outbreak of the emergency measures – along with countries such as Germany, Pakistan, Malaysia.

At the beginning of April 55% of the Bulgarians consider, that the threat is exaggerated or even strongly exaggerated (just a few days ago the national snap poll confirmed this evaluation with almost identical result). It turns out that according to the present wave of the international survey Bulgaria remains among the societies that find the threat of the coronavirus rather exaggerated – along with Pakistan, Philippines, Malaysia etc. The share of those who found the threat exaggerated however was much higher just before the introduction of the state of emergency – 72%. Obviously, before the spread of the disease in the country more people underestimated it.

78% of the adult Bulgarians, who took part in the international survey, claim that they are more or less ready to sacrifice some of their human rights, if it would help overcoming the disease – at 83% just before the emergency measures were introduced. Just a few days ago the national wave of the survey registered 73%.  In our country this indicator does not show increase over the time or even shows decrease. Thus, Bulgaria remains in the middle of the international “ranking” of countries by this indicator, but is also among the few countries in which the desire to limit rights actually shows signs of decline – contrary to the general trend of growth worldwide.  Other similar societies in this regard are Italy and Austria. Perhaps, with life in restrictions a bit more people in our country are against the bans or probably they are calmed because of the success in prevention infection spread compared to the rest of Europe.

57% in our country believe that after the pandemic, the world will change dramatically, and another 57% believe that in tomorrow’s world the main forces will show more cooperation instead of confrontation.

However, the concerns about losing jobs are deepening. 22% say that have lost a serious part of their income. 14% declare that they have temporarily stopped working. 8% of the Bulgarians report that their workday has been reduced. The respondents had given more than one answer.

9% in our country say they even have lost their job – a serious increase within a few weeks. At the verge between March and April this share was 6%, and a week earlier – 3%. 22% of the Bulgarians agree with the provocative statement that democracy is not effective in this crisis. This share is not minor, yet 78% do not share this criticism of democracy. Bulgarians have not lost their democratic reflex. In terms of views on democracy and fear for the workplace, Bulgaria seems more representative of the general attitudes of the world.

A total of 17036 adult persons were interviewed globally. In each country a representative sample of men and women was interviewed between 3rd and 10th of April 2020.

Details on methodology by country are presented in the table below.

All survey results are available in additionally attached documents, also available on www.gallup-international.com 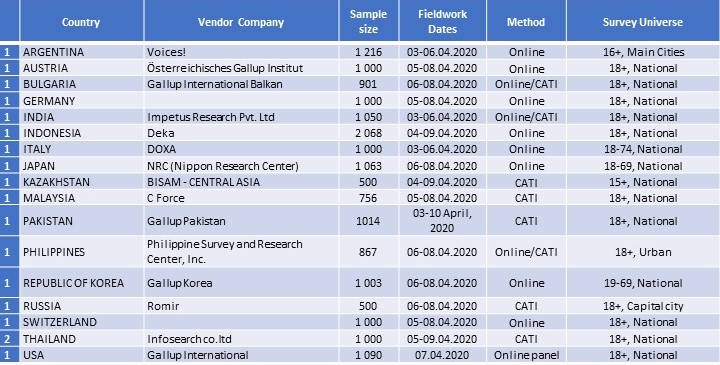