Among the main public institutions, outside the operational political and judiciary powers, the public image of the European Union scores highest among the ‘external’ authorities and the army – among the internal authorities in the eyes of the Bulgarians. In the last months there are no significant changes in the trust in the institutions, with only the army meeting increased trust. And when it comes to the police – more survey waves need to be conducted in order to determine if the recent incidents during the anti-government protests have affected its image. These conclusions are from the traditional sociological overview of “Gallup International Balkan” conducted in the end of every political season.  A while ago data was published regarding the public trust in the parliament, the government, and the President.

The trust in the overall image of the European Union remains unchanged during this political season as well – the last survey wave took place a month ago and showed that 59% have confidence in the EU and 30% do not. The rest are doubting. The Bulgarian euro commissioner Mariya Gabriel is trusted by 22% of the Bulgarians, 45% do not trust her. This makes her part of the relatively trusted Bulgarian political figures, compared to many others.

The attitude towards NATO is traditional – 32% have trust in it and 50% do not. This evaluation is also relatively positive considering the overall Bulgarian evaluation of different authorities. For example, taking into account institutions such as the parliament, NATO remains more approved. 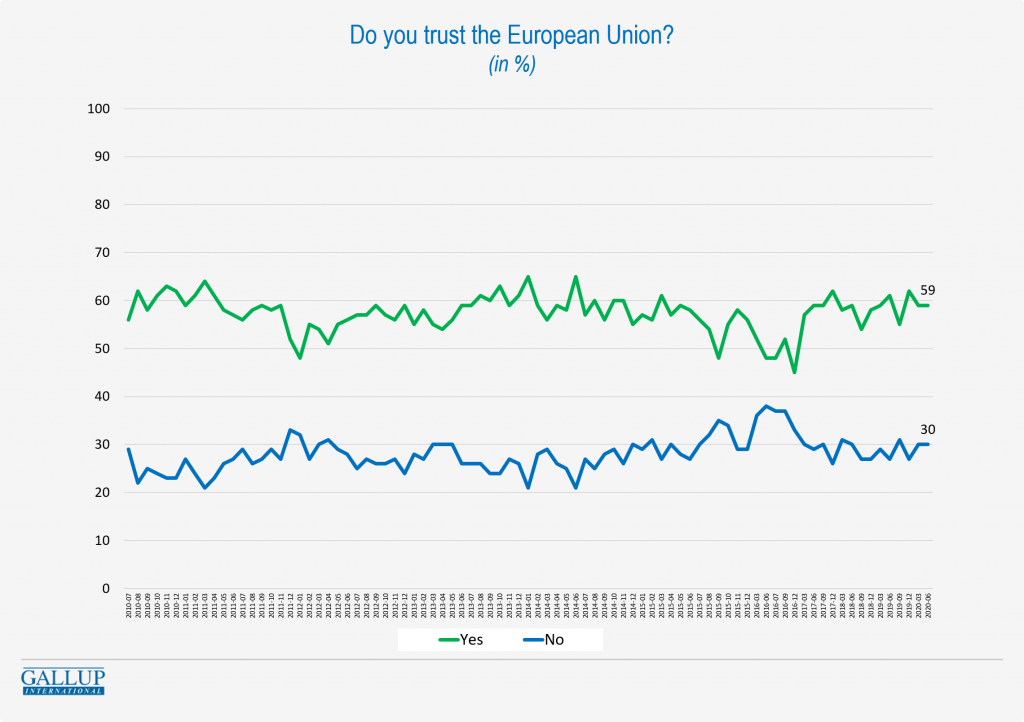 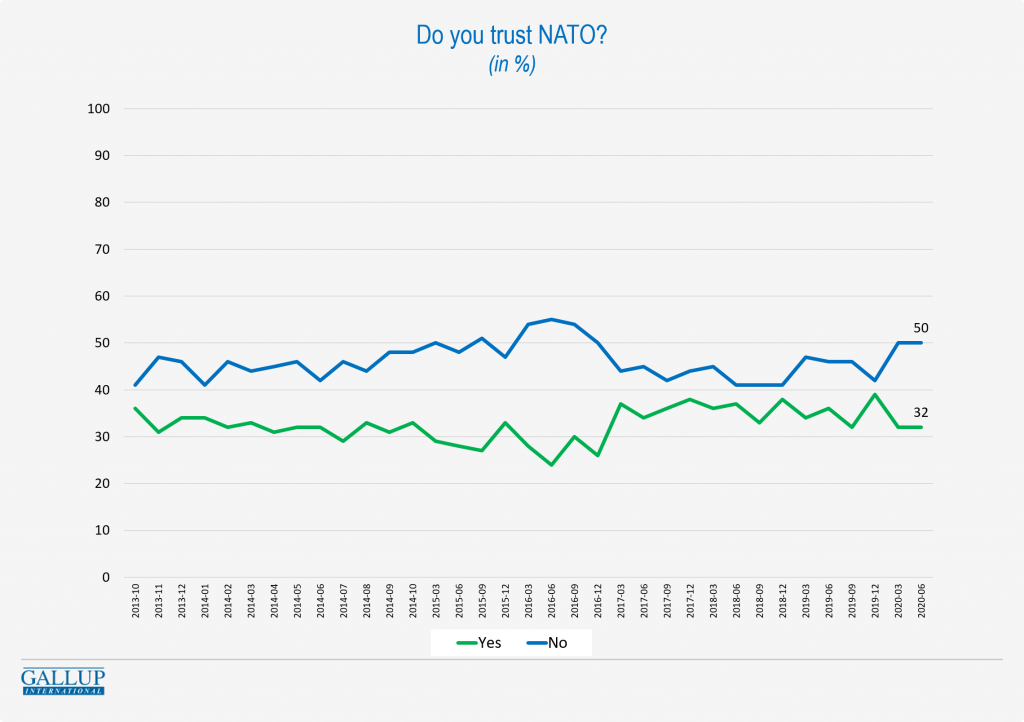 The Bulgarian army meets the highest trust during the July measurement since at least a decade – 53% of the respondents are positive, while 30% negative. The rest are doubting. In the last years, this tendency has remained stable and the last month shows the greatest increase in trust. Thus, the army remains one of the internal institutions with highest trust.

The attitude towards the police is different. The trust and distrust continue being on similar levels. The data is before the protest peak when dubious police actions were observed. 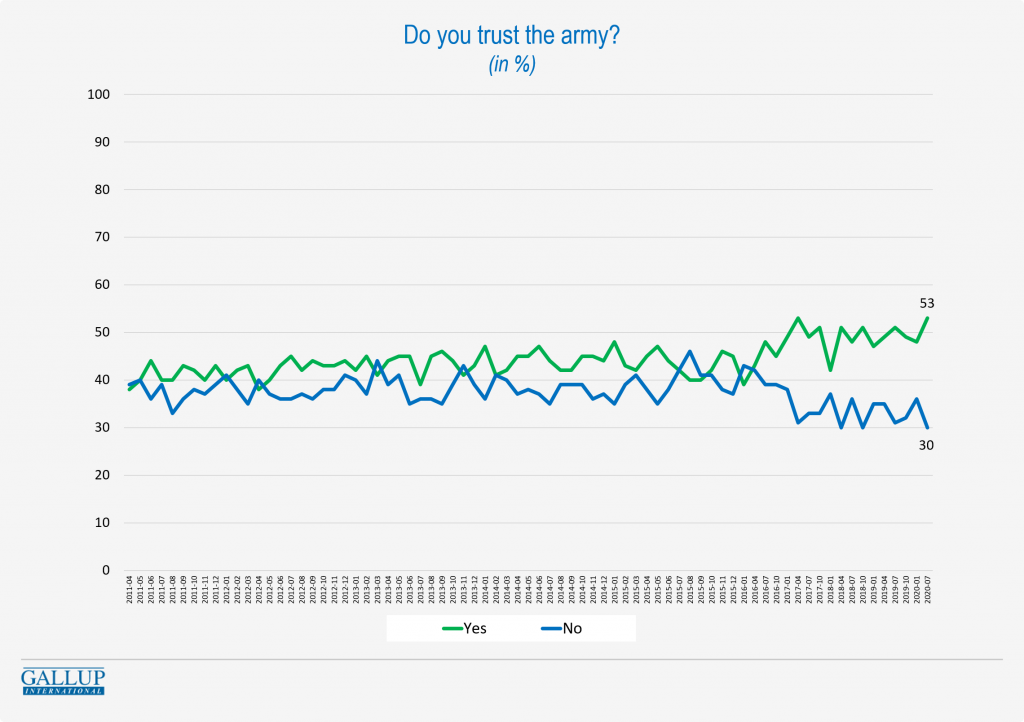 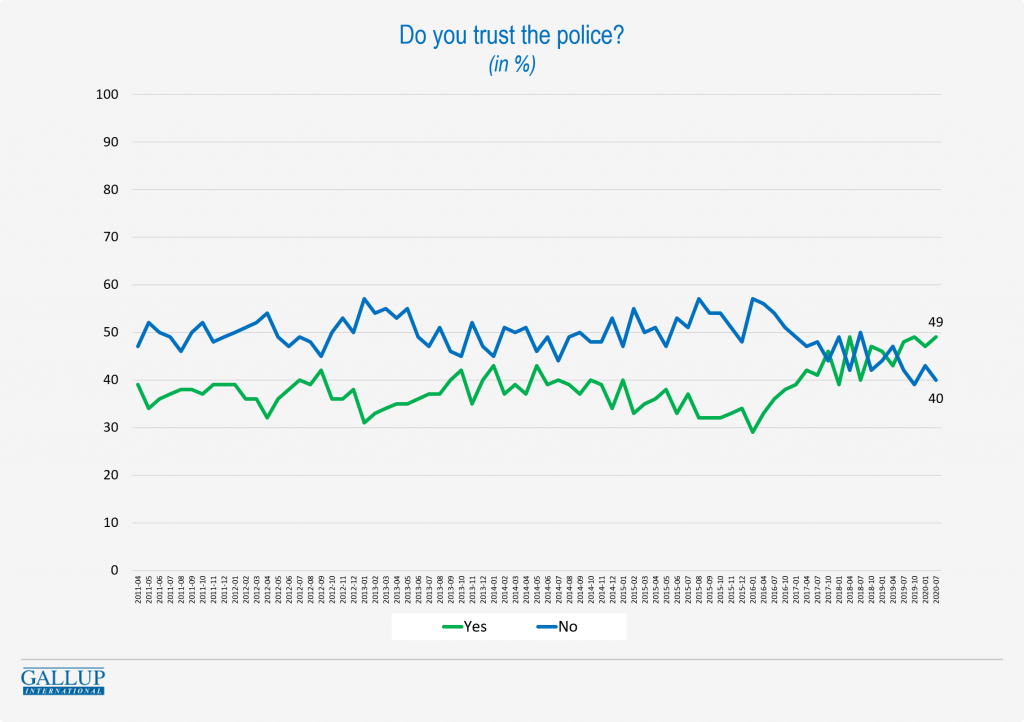 Traditionally, the church is well-perceived by Bulgarians, but a number of scandals or historical factors often undermine its image.

A specific public authority is the ombudsman. However, Diana Kovacheva’s recognizability is yet to grow and it is therefore too early for conclusions regarding the public opinion.

The data is part of the monthly research programme “Political and Economic Index” of “Gallup International”. The last two measures were carried out between 2nd and 10th July 2020 (among 806 Bulgarians over 18) and between 4th and 12th June (among 809 Bulgarians over 18). The maximum standard deviation is ±3.5% at 50% shares. 1 per cent of the sample corresponds to about 55,000 people.