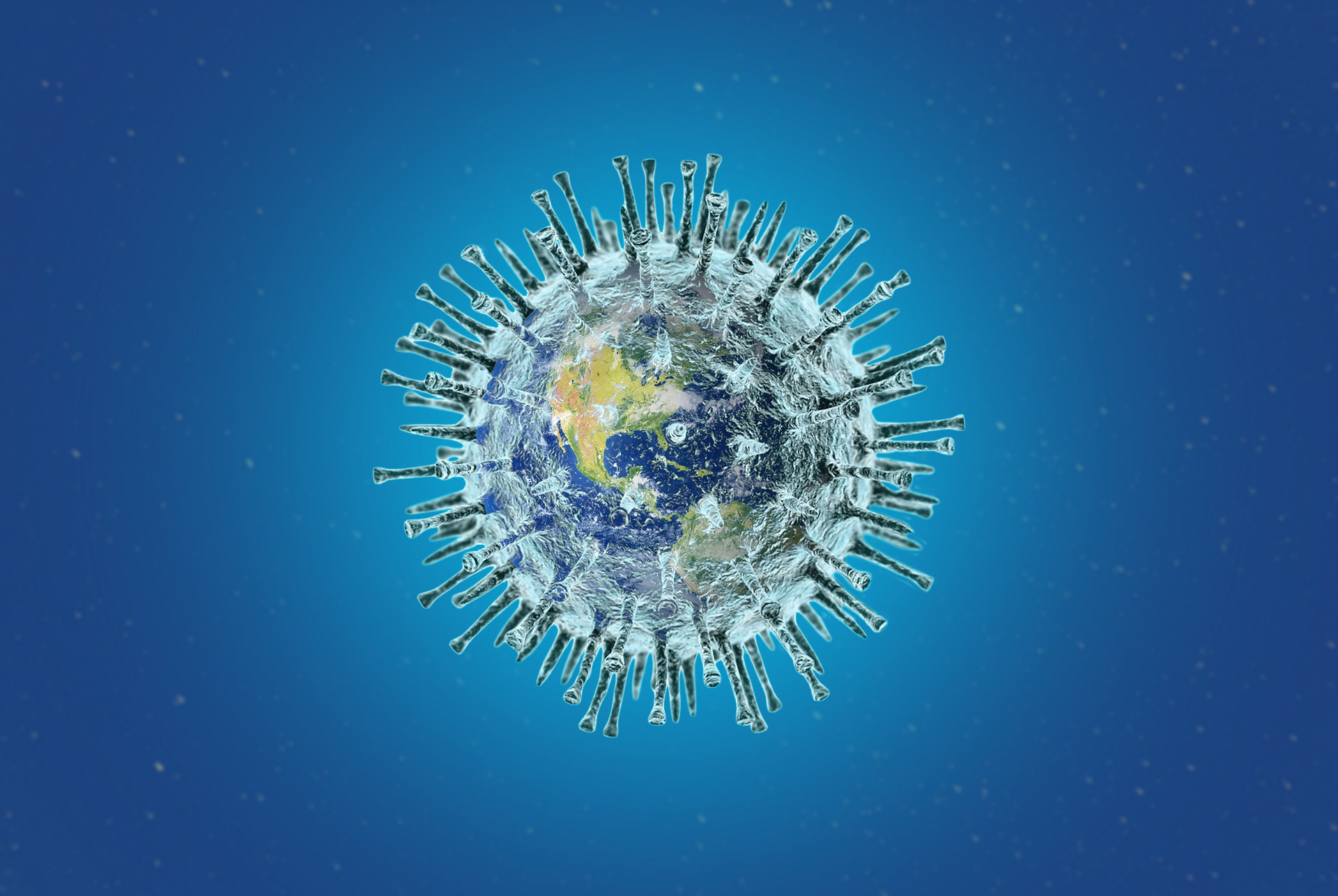 Despite almost six months of intense media scrutiny, fears of the coronavirus infection remain high; people across the globe are largely still supportive to their governments but not at the levels registered at the beginning of the crisis; while opinion is equally divided on whether life will return to normal in 2021.

These are some of the findings from the third wave of global polling, carried out by the world’s leading Gallup International Association – in 19 countries, including the USA, Russia, UK, India, Italy, Japan etc. The first wave was in March and the second – in April. See more at www.gallup-international.com

The fear of coronavirus infection remains high in the world, but some symptoms of decrease are to be found.

Despite the US, UK and Italy having 40% of all deaths worldwide, the curve in each country is now under control and lockdowns being lifted. Yet the shock remains high – 71%, 70% and 79% respectively in each country agreeing that they are afraid that either they or someone in their families may actually catch COVID-19. Across all 19 countries surveyed 67% fear catching it, 30% are not afraid.

Two countries where the curve does not appear to have flattened are Philippines and India – and it is these two countries that show the highest level of fear – 53% and 49% respectively ‘strongly agreeing’ that they are afraid of a family member catching it.

There is however a slightly softer view when respondents were asked whether the threat from the virus was ‘exaggerated’. While 54% feel that it is not, 41% feel that it is exaggerated. Perceptions of an exaggeration are highest in Bosnia and Herzegovina (66%), Kazakhstan (61%), Bulgaria (58%) and Moldova (58%). But perhaps there is a lesson here to be learnt from recent history? Just 15% of those in Republic of South Korea (recently experiencing the SARS pandemic) believe the Coronavirus threat is exaggerated.

Support for Government handling of the crisis remains high – 63% approve, 34% disapprove. Yet there are some significant shifts in opinion since Wave 1.

In countries such as Republic of South Korea, Malaysia and Switzerland support for government action on the coronavirus handling seems to be growing. In Kazakhstan and Bulgaria, the values reached between March and April remain broadly the same today.

Meanwhile Japan (33%), Bosnia and Herzegovina (36%) and the UK (38%) show significantly lower levels of Government approval. And how about President Trump? 40% continue to approve, 55% disapprove. 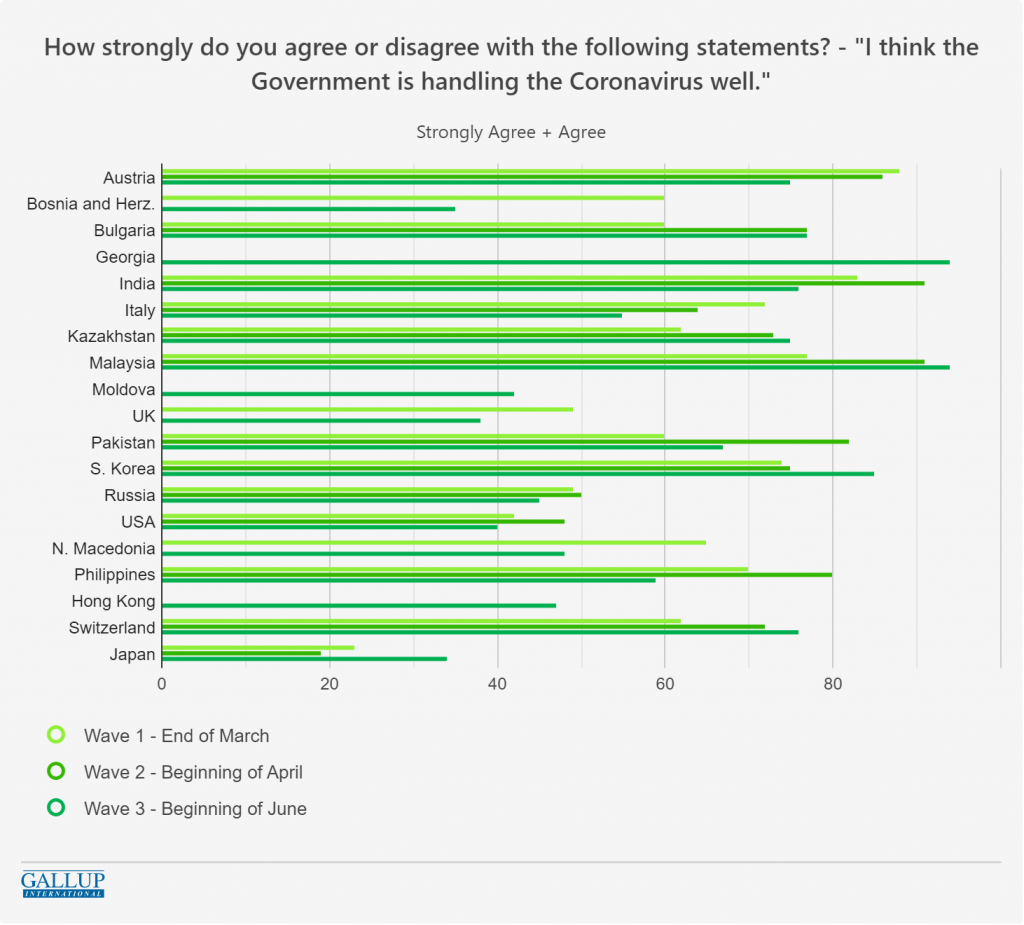 Cleary government approval is impacted in part by a perception on whether the virus is under control. Opinion globally here is split – 44% say it is now under control, 49% that it is not. But the scale of opinion for a global pandemic is striking – ranging from 15% of those in Japan thinking it is under control to 95% in Georgia.

One issue where majorities in most countries surveyed agree on is the financial impact.  In 14 of the 19 countries polled, a majority say their household income has decreased. Families in the Philippines (88%) and Pakistan (87%) are hardest hit.

But how about prospects for the future? There is no clear expectation on the prospect of life returning to normal. More than two out of five 41% believe that by the end of the year things will return to normal, while 47% disagree. Those in Kazakhstan (65%), Bulgaria (61%), Malaysia (60%) and Pakistan (59%) are the more optimistic while three of the G7 members in Japan (11%), USA (28%) and UK (20%) are the most concerned.

‘There is no doubt that globally the return to normal started without the proclaimed ‘new normal’. People are on the streets, shops are open, planes are in the sky and borders are crossed, even if not all of them. The old new virus has not gone and, in a way, will never disappear because viruses are a part of our life on the Planet. Many argue that we overreacted and caused much bigger damages (including deaths) that the disease itself. Years will follow to understand why and years will follow to recover. Something new is happening not in our bodies but in our heads and it very much resembles a new religion – a new egalitarian cult.’

Where does Bulgaria stand?

Part of the data on Bulgaria on the current wave of research have already been published on  последната публикация на „Галъп интернешънъл“. The fear of coronavirus has been gradually decreasing since April. But the worry is still evident and the data is obtained before the increase of cases from the past weeks.

In the beginning of June the majority of Bulgarians consider the coronavirus situation under control. The distribution of the coronavirus has been dynamic and changes in the perception of worry and control over the situation are possible. This will be seen in the following waves of research by “Gallup International”.

At the same time, the Bulgarians are convinced that the responsibility for decisions regarding one’s health is personal (84%) rather than governmental (10%). In the last weeks, following the removal of various measures here and abroad, this responsibility was tested.

The support for the government regarding the coronavirus situation remains stable and it is still on the levels observed in the most worrisome period for our society (in April) – around 77%. The tendency to support the government when it comes to the coronavirus crisis is common to all countries that have participated in the research. As it was noticed several times in research by “Gallup International”, the pandemic brought a situational boost to the trust in governments almost everywhere around the world.

As mentioned above, the Bulgarians are among the nations most convinced that the threat is exaggerated – 59% of the respondents support this statement. The doubt in the severity of the threat has been decreasing in the past months but still, Bulgaria is among the leading countries in this manner.

The Bulgarian society is among the ones that expect or hope to go back to normality in their daily lives by the end of the year (61%). To large extent this may be linked to the economic effect of the pandemic, which was felt in the household income of 1/2 of the Bulgarian families.

Almost 19 000 adult persons were interviewed globally. In each country a representative sample of men and women was interviewed in the first weeks of June 2020 either online, via CATI and CAPI. The margin of error for the survey is between 3-5% at 95% confidence level.

Details on methodology by country are listed in the table below.