Government approval during the pandemic is still high, but is slowly declining. The threat of the disease is also considered significant, yet now it seems a bit more exaggerated to people around the globe. Travel restrictions and sacrificing human rights are widely accepted as a means of fighting the pandemic. The attitudes towards the vaccines are rather positive, the shadow of doubt, though, remains significant.

These are some of the highlights of the new global research on attitudes towards the Coronacrisis, conducted by Gallup international Association at the end of 2020. The survey includes 47 countries around the world and about 45 000 adult citizens. During the whole 2020 Gallup International Association followed the development in global population’s attitudes towards the pandemic. The results, presented below, are coming from the fourth wave of global research.

More than a half of the world’s population agrees or strongly agrees that their government is handling the Coronavirus well. Two out of every five disagree or strongly disagree. The others hesitate when responding. 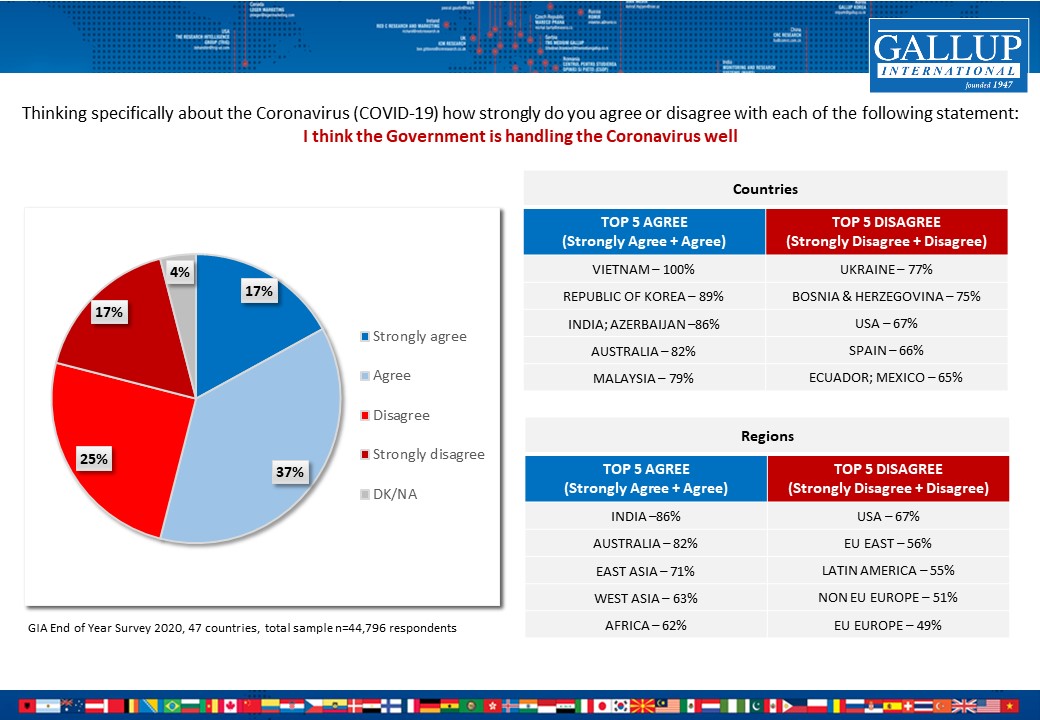 Three previous waves of polling revealed that approval for national governments over the COVID-19 crisis stayed consistently high for the whole 2020. Yet, it now seems that at the end of the year the initial boost in national governments trust has gradually been exhausted and now approval for governments’ actions towards the pandemic slightly erodes. It may be due to authorities’ mistakes and flaws in crisis management or just the pandemic situation is getting more familiar and fear does not produce loyalty any longer.

Human rights over a pandemic – a growing problem

Almost three fourths of the respondents worldwide are expressing their willingness to sacrifice some of their human rights if it helps preventing the spread of the disease. One forth is on the opposite opinion. The rest cannot decide. 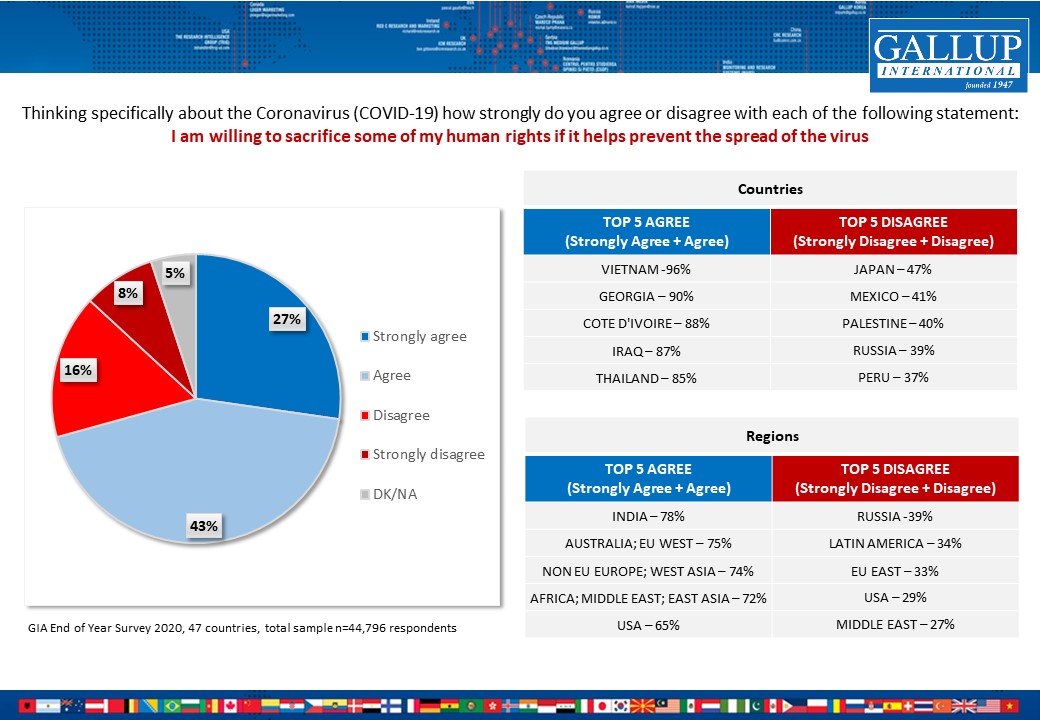 Still there is a clear trend of willingness decreasing. It seems that people around the world have already passed through the initial shock of the new disease and are now more reluctant when it comes to loss of rights. In the first waves of global polling in the spring months willingness to give up human rights was up to 80% worldwide.

A large share of the citizens in India, Australia, Asia, the Middle East, Africa, but also western countries in the EU are willing to sacrifice some of their human rights if It will help preventing the spread of the disease. Up to 90% of people in Georgia and Vietnam state that they are ready to give up some of their rights in order to fight the virus, but the shares are also significant in Germany, Côte d’Ivoire, Armenia, Iraq, Kyrgyzstan, Austria, etc.

People in Russia, Latin America, East EU and USA are not so keen on giving up their human rights, even if it helps preventing the spread of the virus.

The largest shares of reluctance on this matter are registered in Japan, Mexico, Peru, Palestine and the eastern EU countries.

Travel restrictions are obviously already seen as the “new normal”. More than three fourths around the globe agree or strongly agree that travel restrictions between countries are acceptable in order to fight against the spreading of the Coronavirus. A fifth disagrees or strongly disagrees. The rest cannot form an opinion.

In regions such as Australia, East Asia, USA and the EU (especially the western EU countries) positive answers reach up to more than 80% of all answers (even 91% in Australia).

Automatic approval of travel restrictions shows societal cooperativeness. However, fear still exceeding free will could be an alarming symptom – a year after the outbreak of the virus and months after the appearance of the first vaccines.

Is the threat exaggerated? Rather not, but the world is not as sure now as it was in April.

More than two out of five around the world agree or strongly agree with the statement “I believe the threat from the Coronavirus is exaggerated”.  The majority, yet, disagrees – more than 50% say so. The rest are not sure. 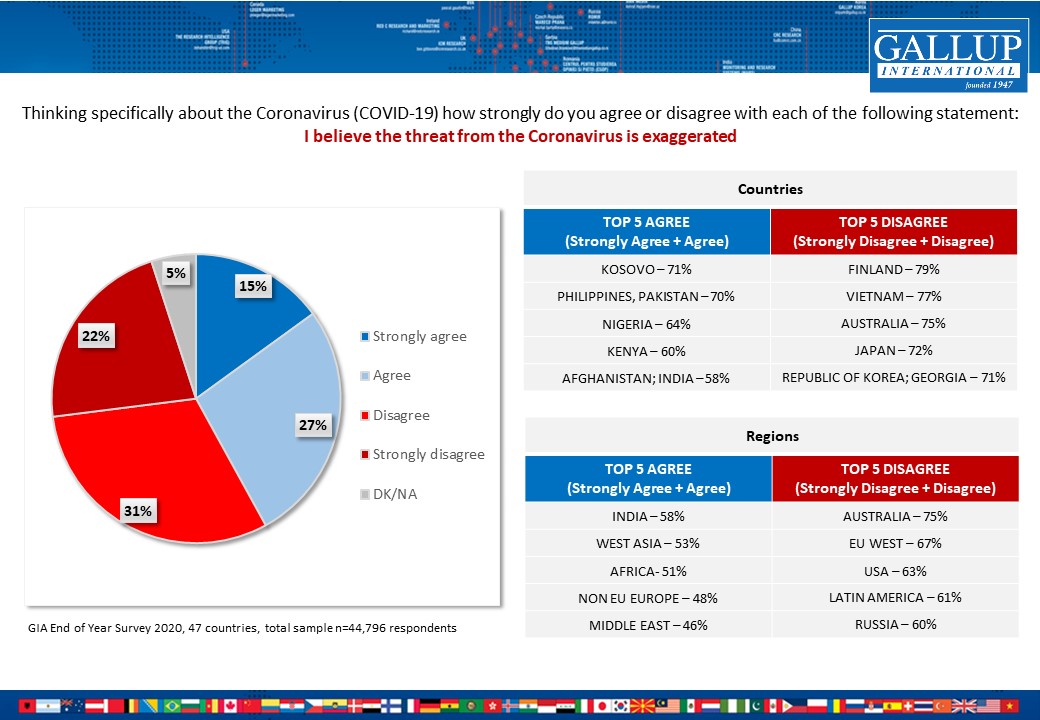 The feeling that the threat is actually exaggerated is slightly growing, compared to recent months. In March for instance the public opinion on that matter was equally divided. Later, in what was considered as a first peak of the disease, supporters of this specific view shrunk to a third of all answers, while those who disagreed were near two thirds. In summer, though, with the decline of the number of registered COVID cases, belief in exaggeration began to grow again. Although the numbers of the new cases of COVID-19 rose again in autumn and many countries around the world were affected by the considered second wave of the Coronavirus, the trend for growing belief in exaggeration of the situation continues at the end of 2020.

People in India seem more prone to believe that the threat is exaggerated (more than a half of all respondents think so). The share of those who neglect the danger is also significant in West Asia, Africa and non-EU Europe. Most prone to underestimate the threat are people in Kosovo, Philippines, Nigeria and Pakistan.

People in Australia, USA and EU (especially the Western EU countries) on the other hand are most likely to reject the above statement. In countries such as Finland, UK, Japan and Korea the shares of disagreement are the most significant.

Vaccines for me and my country

Vaccines against COVID-19 and vaccines in general are met with trust around the world. Yet, in some countries the reluctance towards a possible vaccination exceeds the willingness, even if the vaccines are considered safe and effective. Medical experts and public authorities have apparently a lot more to do and explain in order to convince people in vaccines’ safety.

More than two thirds of the people around the globe say that they would take a COVID-19 vaccine, if it is publicly available and is considered safe and effective. A fourth, however, are more likely to decline the opportunity to take a vaccine. Less than 10% do not know. 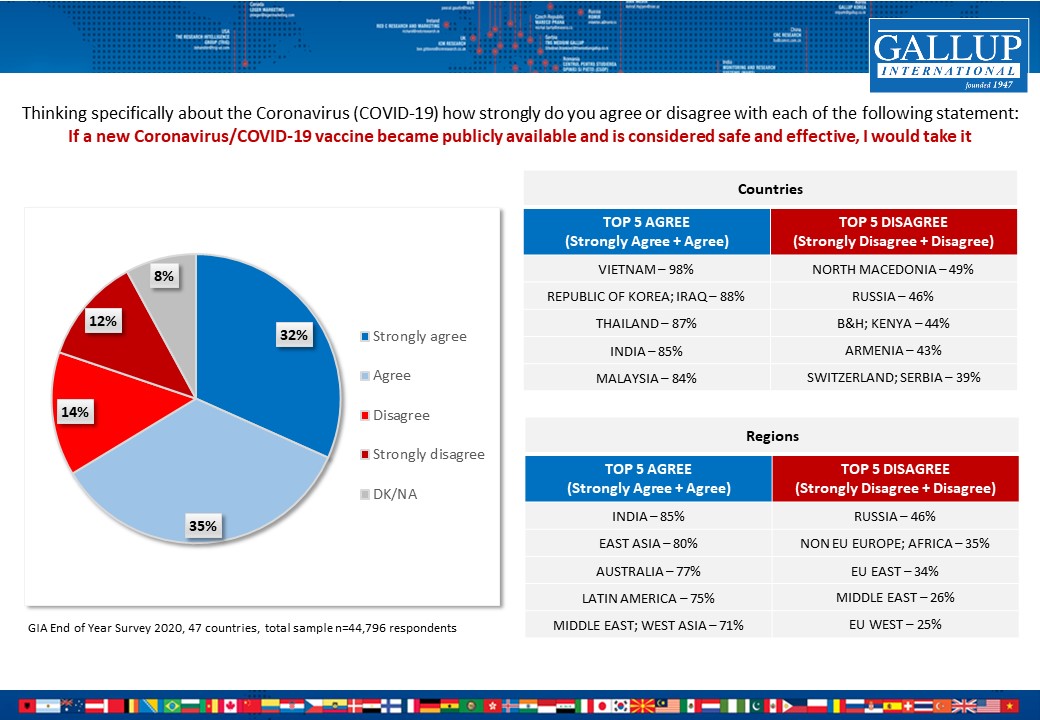 Among regions and big nations, people in India (85%) and Asia (up to 80% in the east part of the continent and even 98% in Vietnam) are the most willing to take the Covid-19 vaccine.

People in Russia, Europe and Africa seem more reluctant towards a new vaccine against Covid-19, even if the access to the vaccines is easy and they are considered safe and effective. Most unwilling towards a new Covid-19 vaccination are the people of Bosnia and Herzegovina, Serbia, the Czech Republic and other European countries. Even in these countries though there is no clear majority against the opportunity for COVID-19 vaccination. The shares of those who consider possible vaccination and those who are rather reluctant are almost equal. 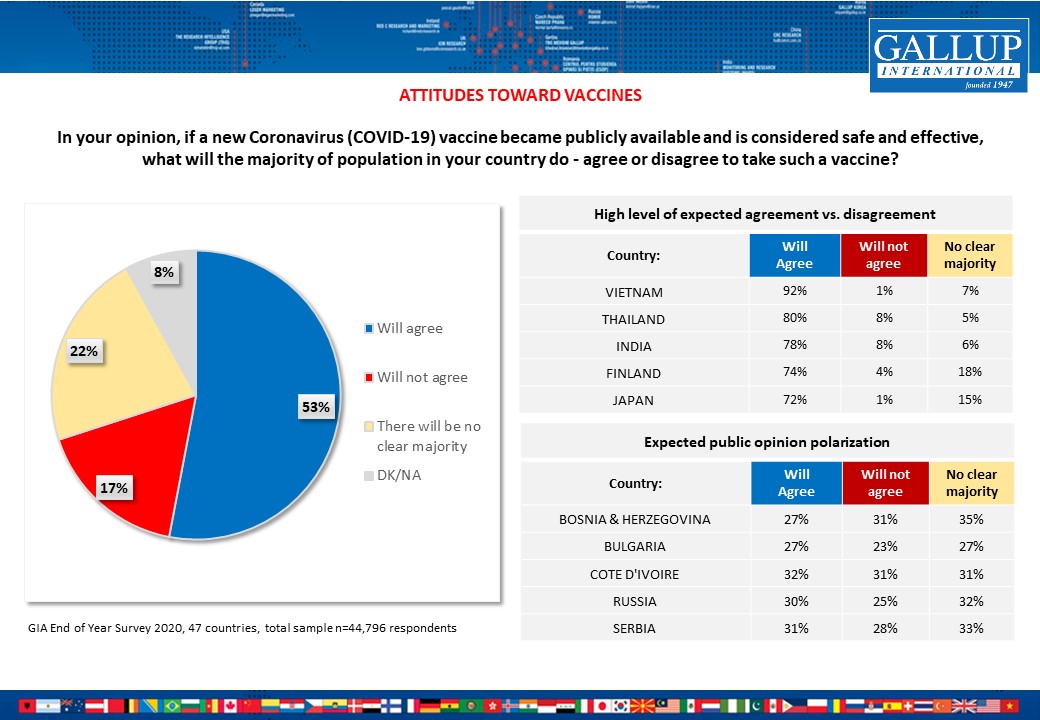 Again, people in India and East Asia as a whole (both with more than 70% shares of positive answers) are more convinced that their compatriots would take the new COVID-19 vaccine. People in Russia, EU-east and Africa, on the other hand, show a hesitant belief in their societies’ willingness to vaccinate, but with a significant share of negative answers as well (up to a fourth of all answers). In general, in those regions there is no clear majority when it comes to peoples’ willingness to take a new Coronavirus vaccine.

Nevertheless, is seems that worldwide the largest share of people believe that the majority of the population would rather vaccinate if a new COVID-19 vaccine is available and is considered safe and effective.

It seems that the global Coronavirus pandemic has also made the majority of people around the world more likely to vaccinate in general. 50% of the respondents say so. Yet, 18% claim that after the pandemic it is less likely to vaccinate. 28% say that there has been no change in their views on vaccines.

More prone to vaccines in general after the pandemic declare to be people in India, Asia and the Middle East. People in EU and Europe in general, and also in USA on the other hand say most often that there has been no change in their view towards the vaccines.

As a whole it seems that nowhere in the world has the Coronavirus pandemic significantly produced negative attitudes towards the vaccines in general. Up to a fifth of all respondents in different regions share that now it is less likely or a lot less likely for them to vaccinate. The biggest shares are in the Middle East and Europe (mainly in the eastern EU and non-EU countries). 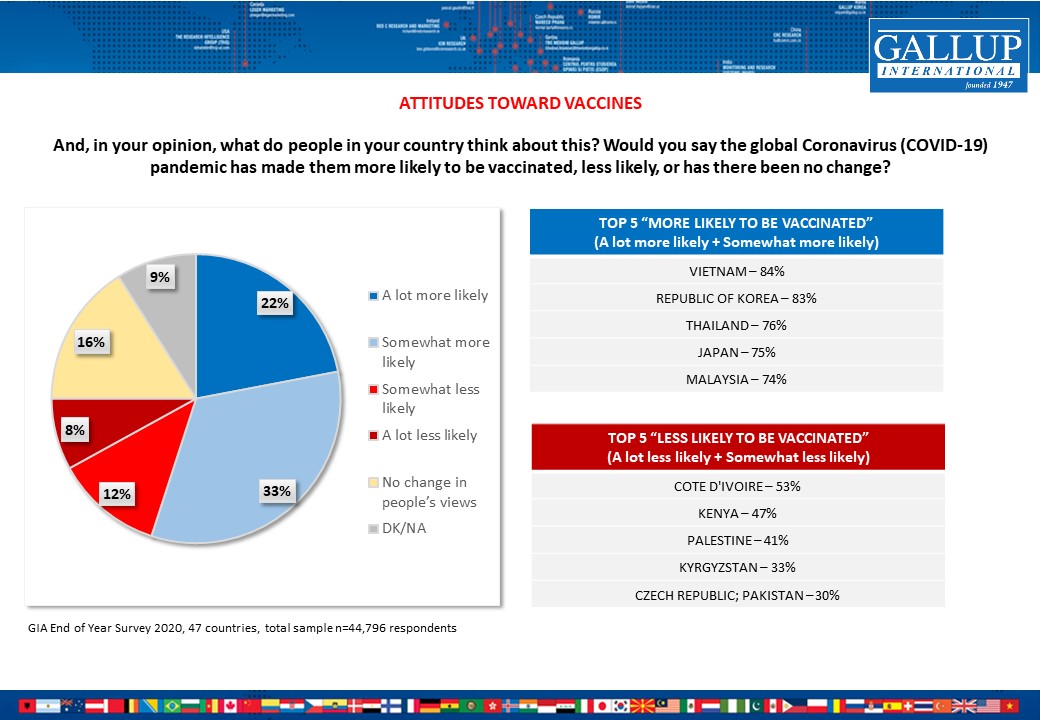 People in East Asia, Latin America and India view their societies as most prone to vaccinate in general after the pandemic. The opposite answers again do not prevail anywhere in the world. Yet a bit less likely to take a vaccine in general are people in Africa and the Middle East – according to the respondents there. No change in people’s views towards vaccinations observe the people in Europe, Russia and Africa. 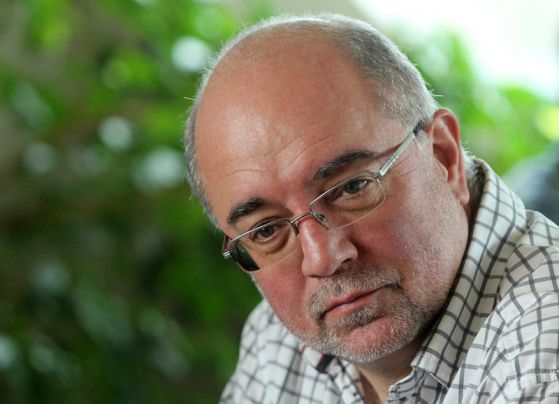 “If the World accepts the so called “new normality” born during the ongoing Corona-crisis, the biggest victim will be the Western values system. Democracy is on stake nevertheless the yet exaggerated dramatic taste of that statement. Authoritarian regimes seem to be more effective in fighting the pandemic. Most of the Western governments /in a broader sense/ tend to follow rather Beijing then Stockholm approach in their attempts to stop the spread of the disease and wonder why they fail. Human rights meanwhile are melting like spring snow in front of the dilemma freedom or life nevertheless it might sound speculative still and nevertheless the sacrifice of generations in the epic history of the fight for individual rights for free choice, free travel and freedom of contacts. Democracy seems to evolve to a hospital, still there is a chance to avoid it

The Gallup International End of Year Survey (EoY) is an annual tradition initiated by and designed under the chairmanship of Dr. George Gallup in 1977. It is conducted every year since then. This year it was carried out in 47 countries around the world.

▪ USA, India, Russia and Australia are not included in any other regional category

A total of 44 796 persons were interviewed globally. In each country a representative sample of around 1000 men and women was interviewed during October-December 2020 either face to face, via telephone or online. 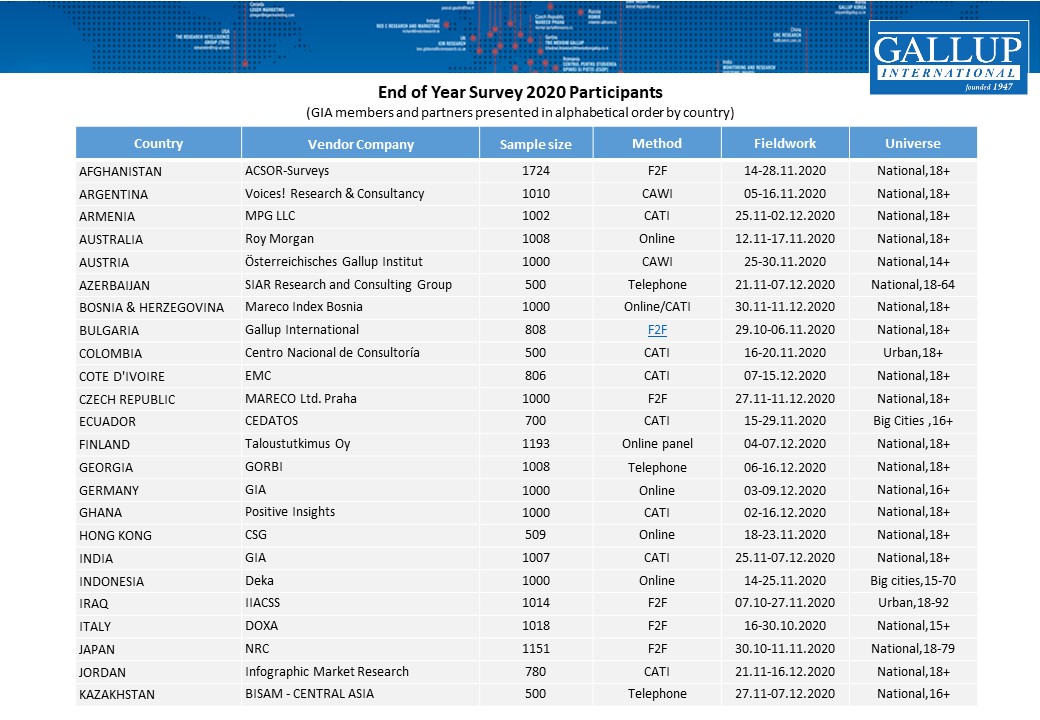