Gallup International > Publications > Society And Values > IF 2020 WILL BE REMEMBERED AS THE YEAR OF THE PANDEMIC AND LOCKDOWN, HAPPINESS HAS STILL SURVIVED AND HOPE IS HIGH. NOT SO HIGH ABOUT THE ECONOMY

At the end of 2020 hope for a better 2021 is easy to be found around the world, but the fear of upcoming economic difficulties is deepening. Globally it is citizens of the EU that drive this pessimism, as the pandemic in many EU countries shows no signs of being under control. However, despite the economic pessimism happiness appears to shine through, though not as brightly as in previous years. More than two out of five (43%) believe that the next twelve months will be better than the previous ones, 24% fear that they will be worse and 26% expect the same as in the past year. 46% believe next year will be one of economic difficulty, 25% are expecting economic prosperity and 24% do not expect any changes regarding their country’s economy.  … 54% of the world’s population describe themselves as happy with only 14% saying they are unhappy.

These are the results from the world’s longest running global survey started in 1979 by Gallup International. Covering more than 40 countries and speaking with over 38,000 adults the “End of Year” survey is an established holiday season tradition.

Year after year since the beginning of the new century, 40 to over 50% of people around the world share hope that the year to come will be a better one. With a slight decline at the beginning of the century. However, at the end of 2008, the share of optimists dropped to 30% due to the global crisis. This was the only case in the new century in which pessimism about the immediate future prevailed over optimism. In the following decade, hope around the world returned to even pass over 50%. But over the last few years it has not been moving far from about 40%. The recent rise in alarming developments around the world has apparently been showing its impact. Traditionally over the years, those who do not expect change stay at about 30% levels around the globe. Shares of those who expect a negative change stay around 20%, except for the global crisis and the beginning of the century when the share jumped. In short, the world is usually more optimistic about the year to come, especially after the crisis, but not so clearly lately.

The good news: coronavirus has failed to make a dramatic difference in the trends. At the end of 2020 the majority of the world’s population is yet again rather optimistic about the future – 43% share that they expect 2021 to be better than 2020. 24% view the upcoming year as worse and 26% do not expect it to be different from 2020. The rest find it difficult to answer.

It seems that people in Europe, Russia and Asia are most pessimistic about the near future. In the EU and Russia, the shares of pessimism are rising up to a third of all answers, while the expectations for a better 2021 have shrunk to 16% in Russia and 35% in the EU. Rather pessimistic sentiments seem to be traditional for Europe and Russia over the years. 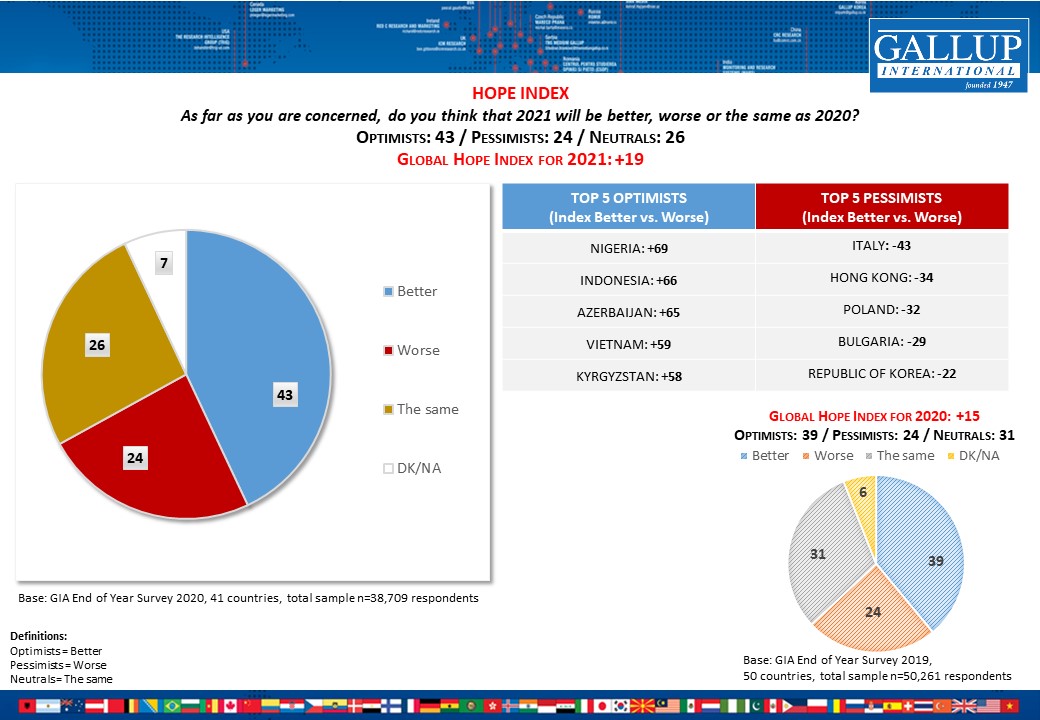 The survey shows that while being optimistic about 2021 the feeling does not stretch when asked to consider the global economy. In a blow to many businesses, it seems that consumer spending is likely to be slow next year. Just under one in two (46%) believes 2021 will be a year of economic difficulty with only 25% believing it will be a year of economic prosperity. 24% think that 2021 will be the same as 2020 for their country’s economy.

Again, people in Europe are the most worried about the near economic future – with citizens of EU even frightened: two thirds of the respondents there expecting a worse year for their country’s economy.

Pessimism regarding the economy also prevails over optimism in Russia (where optimists about the economy are only 6%, while pessimists are 47%), USA and Latin America. Economic difficulty is also expected in Asia, but not so dramatically as in the western part of the word.

Actually, economic optimism around the world has been declining in recent years and the battle with pessimism has now finally been lost now due to the coronacrisis. In the middle of the last decade, optimism was high – stable over 40%. The peak of pessimism was the global crisis. Over the rest of the last two decades, pessimism and optimism have been moving in similar shares of about 30% exchanging places, with “no change” expectations near to 40% shares around the world. 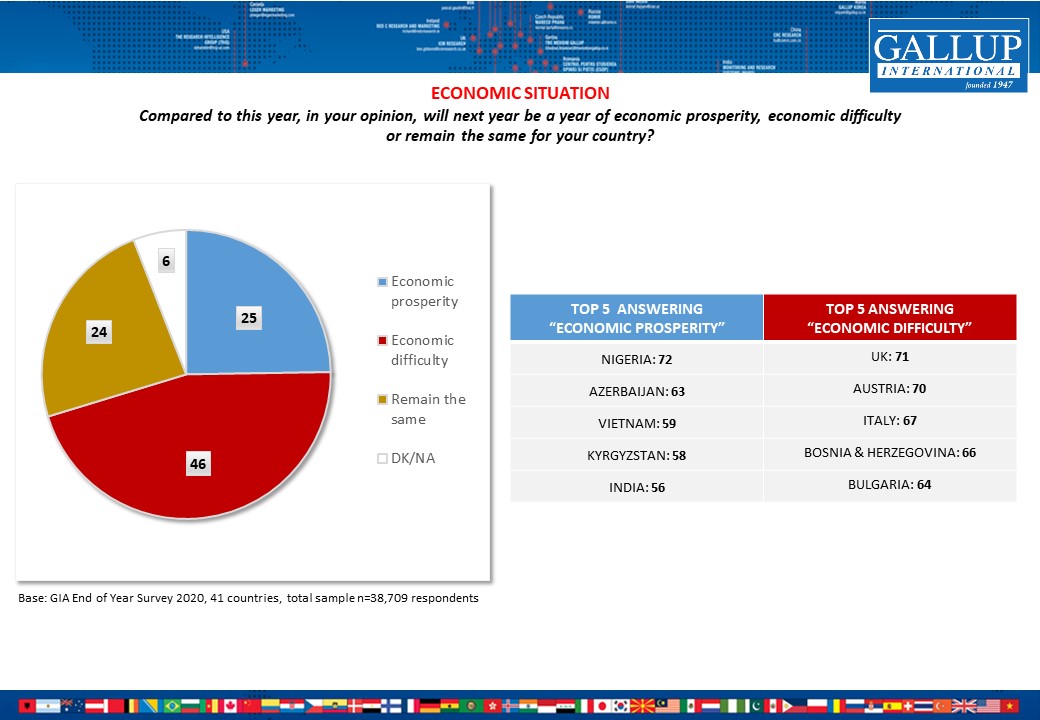 What are the overall trends of personal happiness? An average of about 60% of people around the world in recent years have made a happy personal resort for themselves at the end of each year. About 10% usually say they are unhappy. About 25% make neutral assessments. And there are always a few percent hesitating.

India, Latin America and East Asia stand out as the happiest places in the world in recent years. The lowest levels of personal happiness are to be observed in the Middle East and Russia. The EU lately is also among the less fortunate places – with a slightly happier western EU. 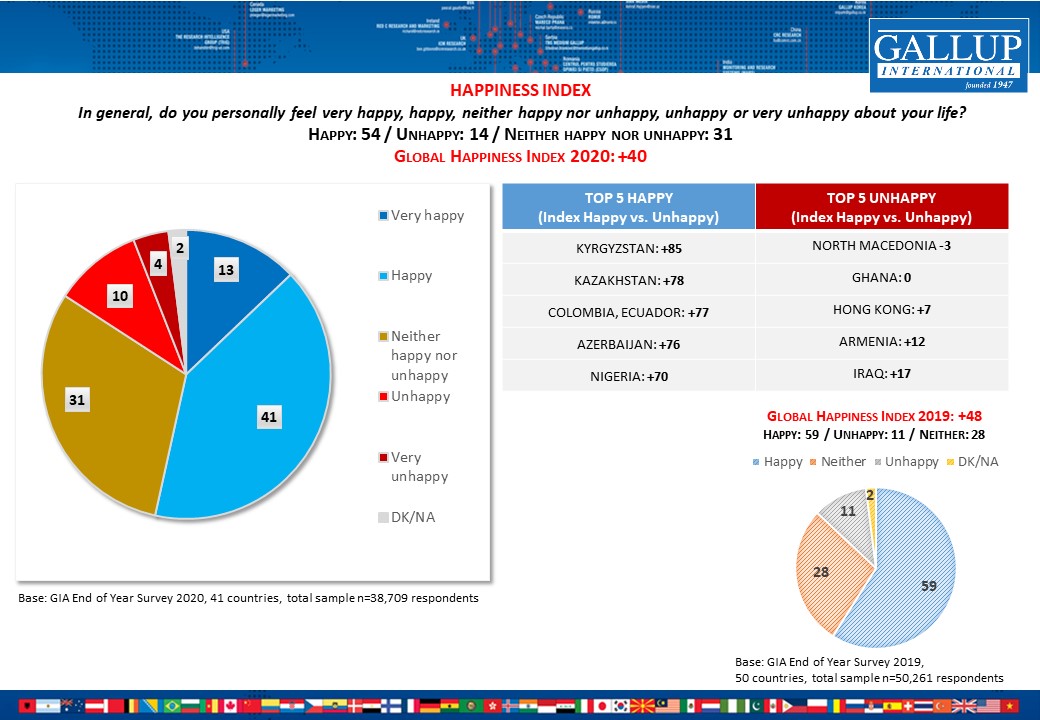 “In such a rare case when we have a real global public opinion the World as a hole keeps its optimism for the next year but pessimistic attitudes are dominant in more countries than usual. While people expect the coming 2021 to bring the end of the pandemic there are no illusions that the economic difficulties are going to be overcome in short terms. For sure the discussion on the balance between health protection and prosperity will be in the focus of global attention for years to come.”

The Gallup International End of Year Survey (EoY) is an annual tradition initiated by and designed under the chairmanship of Dr. George Gallup in 1977. It is conducted every year since then. This year it was carried out in 41 countries around the world.

▪ USA, India and Russia are not included in any other regional category

A total of 38,709 persons were interviewed globally. In each country a representative sample of around 1000 men and women was interviewed during October-December 2020 either face to face, via telephone or online.