Success for the same political parties plus Stefan Yanev’s new party in the event of parliamentary elections today. Standart challenges to the ratings of the political elite, but no desire for elections. Continued consensus on the Russian invasion. Near complete agreement on the topic of North Macedonia. 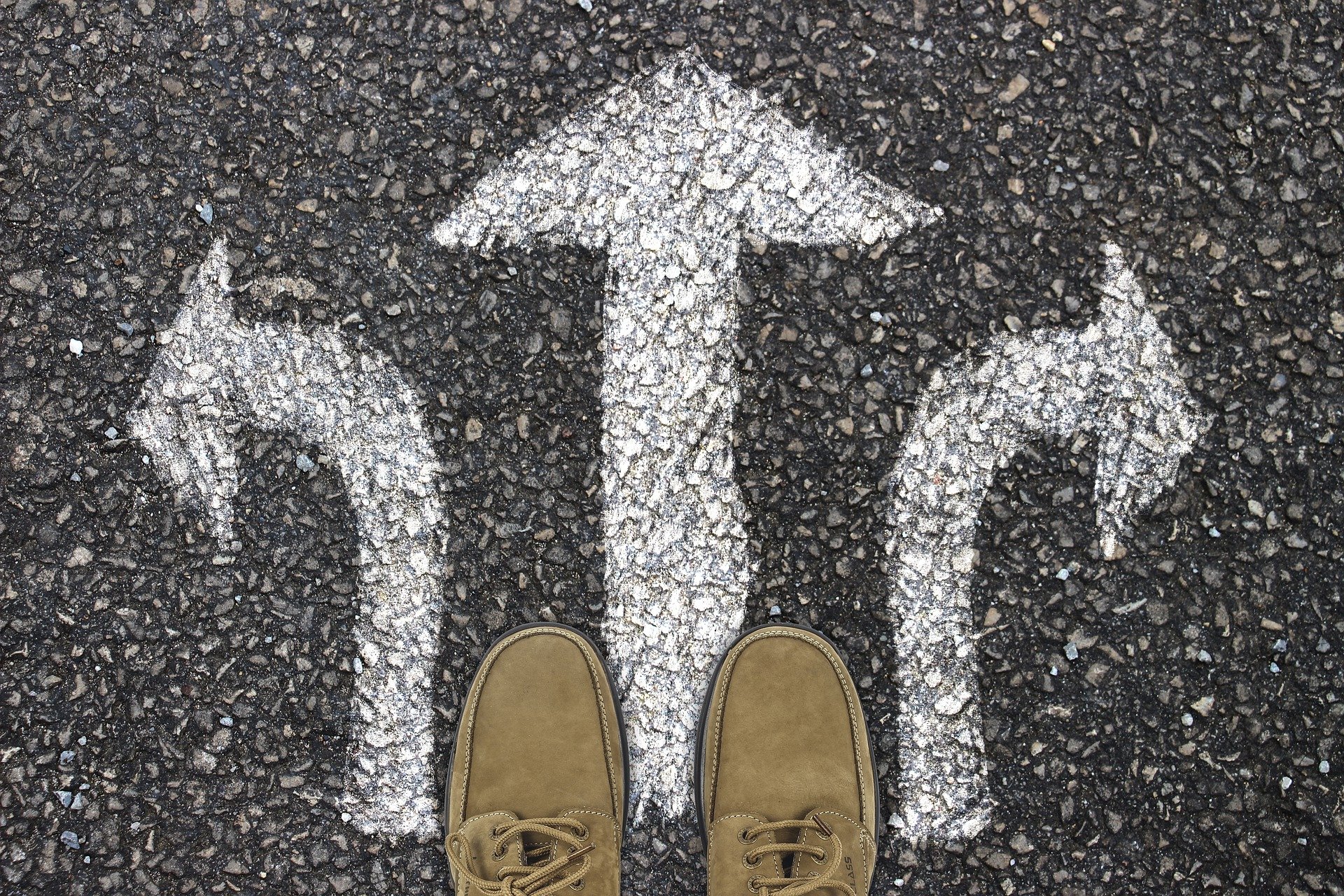 If the parliamentary elections were to take place today, the support for GERB and PP among all voters maintains parity, though among voters who will certainly vote a different picture is painted: a higher share in favor of GERB, growth for “Revival” as well as a good start for Stefan Yanev’s new party. There have been no structural shifts in the trust towards the main institutional and party leaders in the country, though there are signs of a general decline. The fall in trust towards the government is held back by the lack of desire for resignation and especially for premature elections. The declared support for Vladimir Putin’s actions in Ukraine remains low. The societal attitude against compromises with North Macedonia remains firm.

The findings are from the monthly edition of the “Political and Economic Index” – an independent monthly study with 31 years of history, which tracks tens of indicators.

Among the general attitudes of all voters the difference between GERB (13.9%) and PP (13.4%) is minimal. DPS (7.4%) and “Revival” (5.4%) are next, while BSP (4.9%) is even with ITN (4.8%). Stefan Yanev’s new party (3.8%) and DB (3.7%) are neck-and-neck as well. Yanev’s party, however, is still relatively unknown – especially at the time of the study in the beginning of May, while DB is a formation which usually mobilizes itself during the election cycle. After the abovementioned come VMRO, “Rise up, Bulgaria” and others, as well as the option “None”. 35% say they wouldn’t vote. 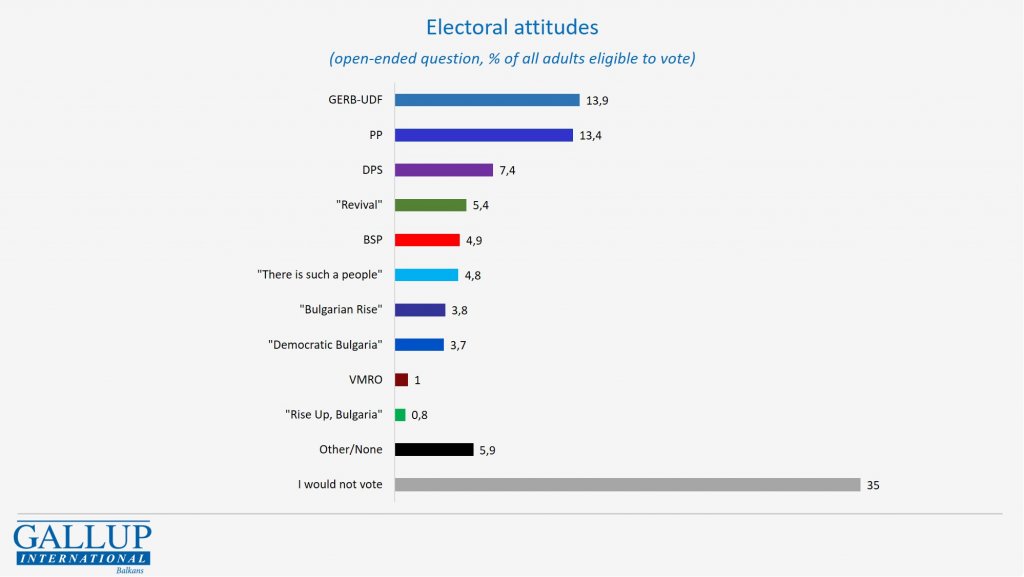 What are the attitudes of those who are certain they will vote (where we find out which formations will pass the 4% barrier and enter parliament)? GERB leads against PP with 24.9% against 18.2%. DPS and “Revival” are even with 11.1% and 10.5%, respectively. However, “Revival” can expect a certain number of “hidden/unpredicted votes” during an election, while DPS stands to benefit from potential votes from Turkiye. BSP has the support of 9.7% of the determined voters. Stefan Yanev’s party’s running start is evident, leading with 5.6% against DB (5.5%) and ITN (5.4%). VMRO has 1.5%, whereas “Rise up, Bulgaria” has 1.1%. The parties to successfully enter parliament would therefore be 8; the new participant is Yanev’s party, whose potential will yet be revealed. 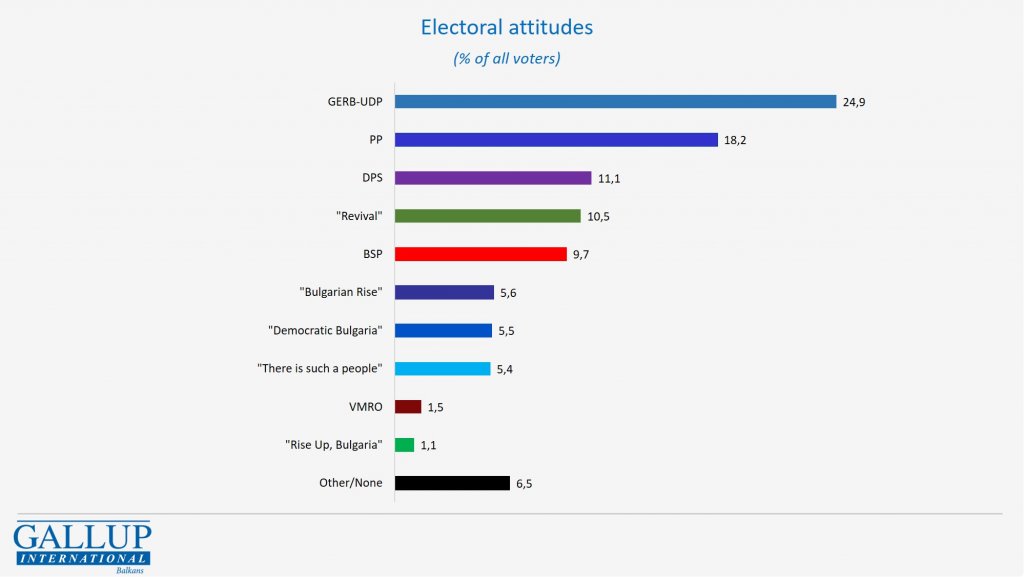 Traditionally, the agency tracks the approval ratings of the main public figures monthly. The most liked among all political leaders is Rumen Radev (46.4% declared trust), followed by Stefan Yanev (29.6%), Kiril Petkov (28.9%), Asen Vasilev (25.2%), Boyko Borissov (13.9%), Slavi Trifonov (12.5%), Cornelia Ninova (12.3%), Kostadin Kostadinov (11.1%), Hristo Ivanov (9.1%), Mustafda Karadayi (8.5%), Nikola Minchev (7.9%) and Atanas Atanasov (5.3%). Usually a large portion is dedicated to mistrust, as well as doubt and unfamiliarity. Radev is the only figure with a positive rating, meaning that the public trust in him is greater than the mistrust, while Nikola Minchev is still relatively unknown to the public and the data still doesn’t reflect his actual approval. The general erosion in the trust in the political elite, caused by the deepening polarization, seems to pose a challenge to the trust in most political figures. 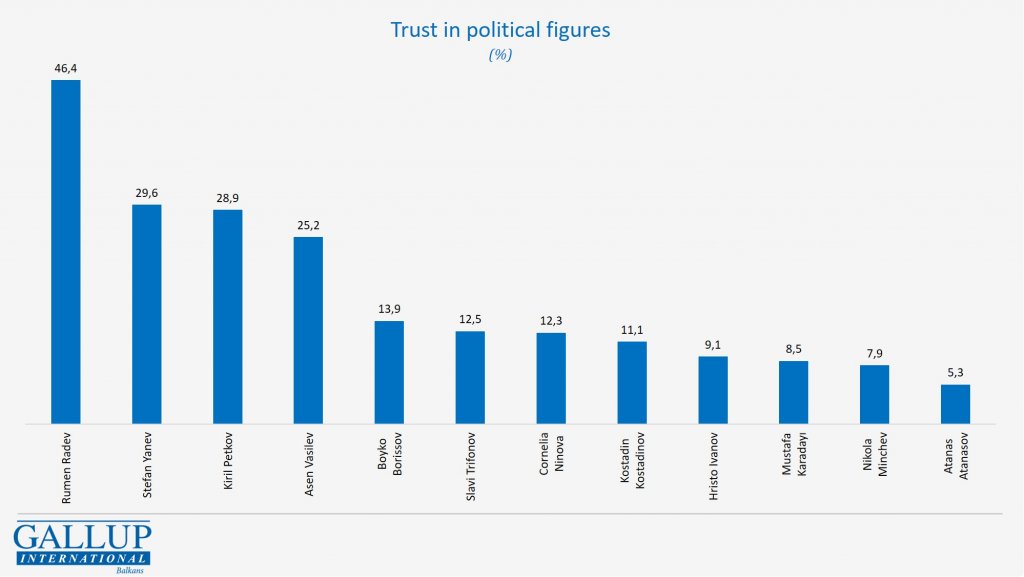 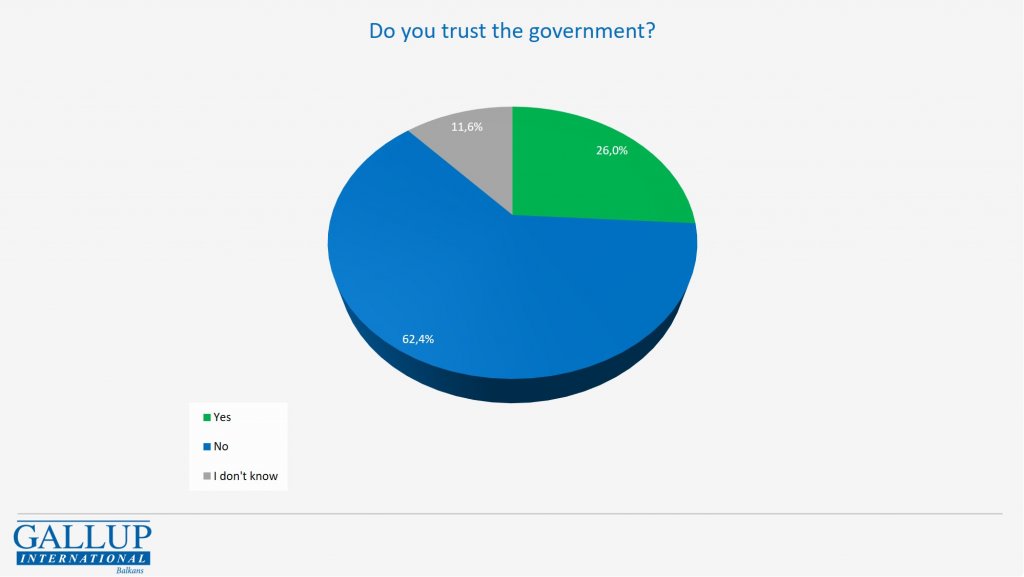 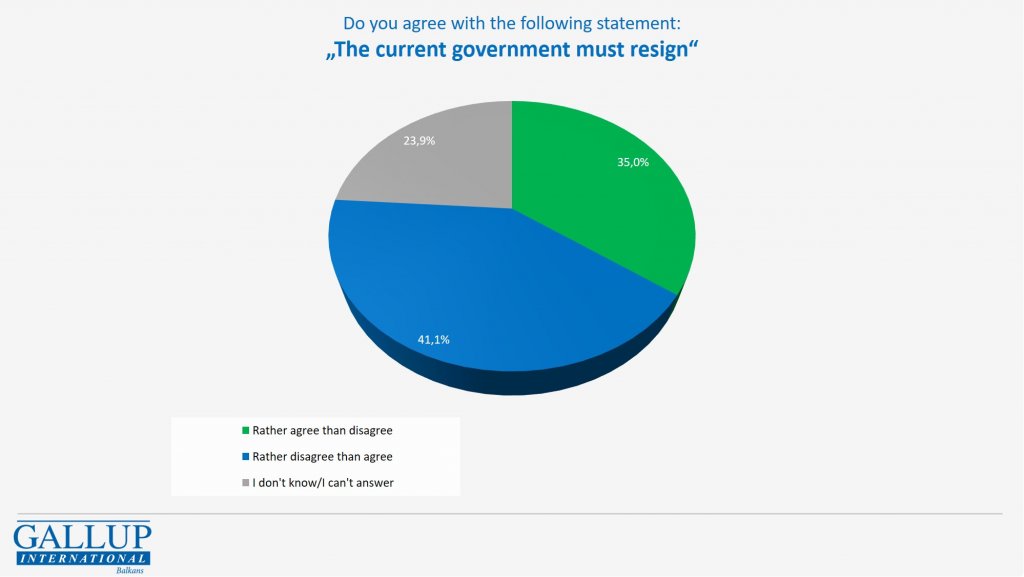 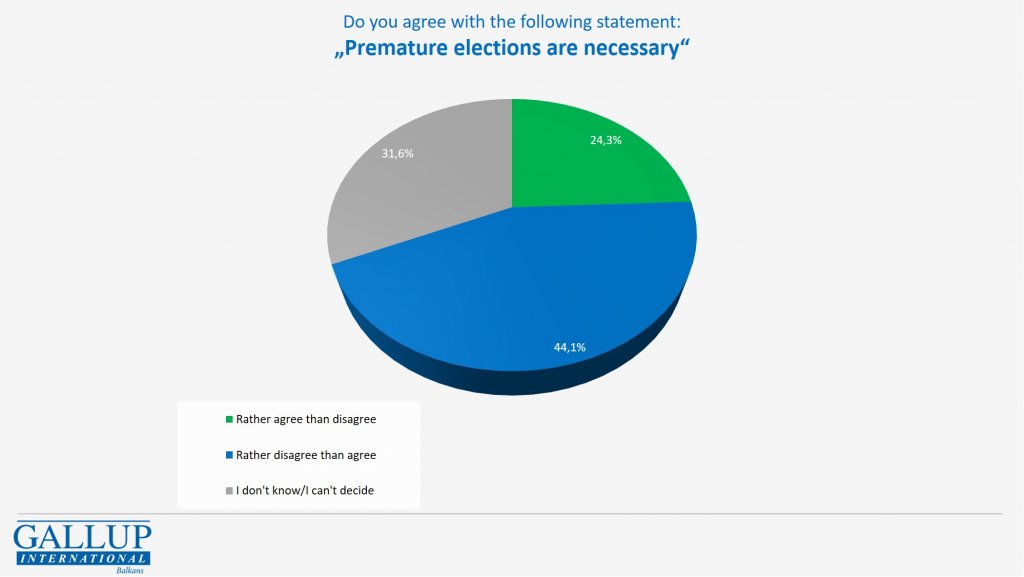 On the most important current topic – the war in Ukraine, 47.1% disagree with Putin’s actions in Ukraine, while 28.6% hold the opposite opinion; the rest are undecided. Despite the non-trivial amount of “undecided” responders the position of most opinionated people on the topic is “against”. It is important to note that some of the answers might contain an element of “desired outcome”. 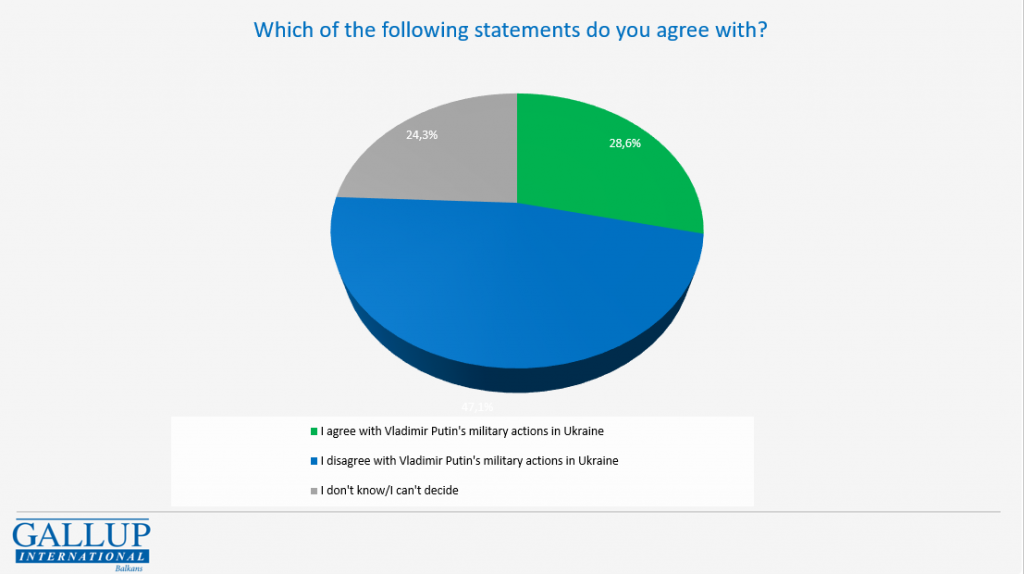 No change is recorded on the topic of North Macedonia. Public opinion continues to show a 10:1 (61.8% to 6.1%) ratio of people unwilling to compromise on the promises made in the Treaty of Friendship, Good-Neighbourliness and Cooperation to people willing to compromise. As is tradition, there is a sizeable portion of the population (10.7%) who are completely against the entry of North Macedonia in the EU. 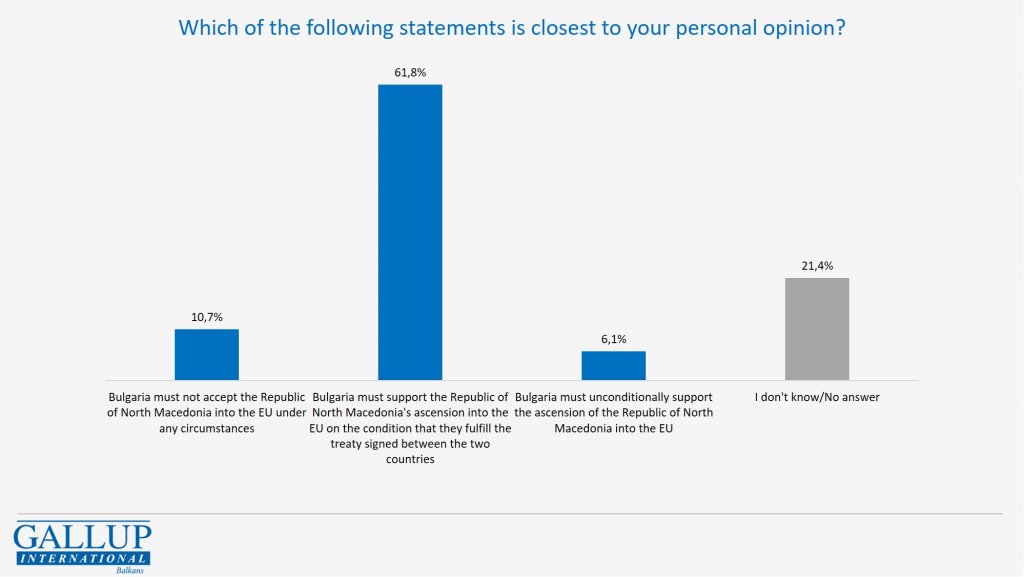 When asked whether the quick European integration of N. Macedonia or the fulfillment of the promises made in the Treaty of Friendship is more important, the ratio of respondents is 6.4% against 69.7%; these positions have become more rigid and unwavering compared to two years ago, when the topic first escalated. 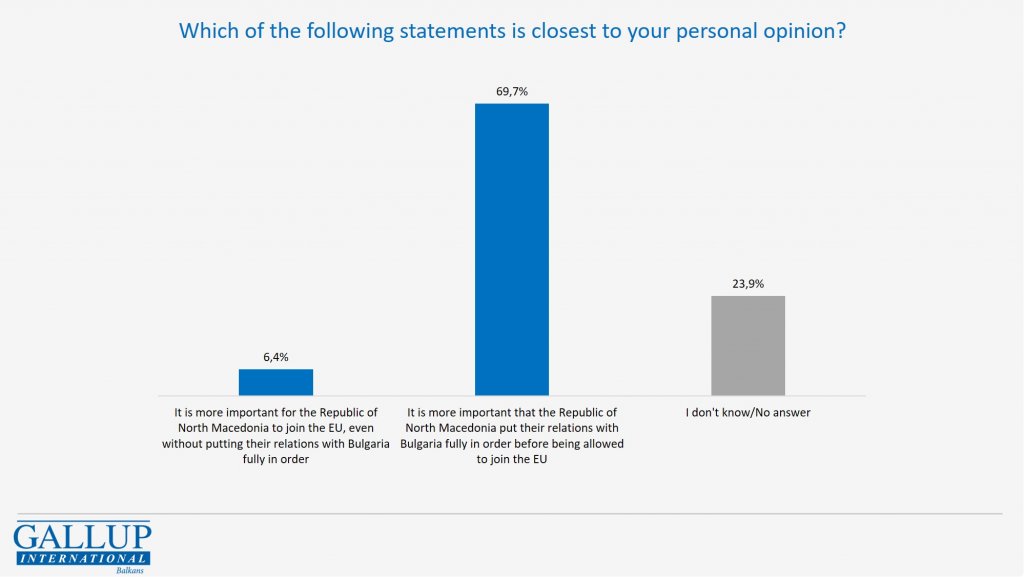 The study is independent, conducted among 805 adult Bulgarians between 29 April and 6 May 2022 – through direct “face-to-face” interview with tablets among a two-step random excerpt, representative of the adult population of the country. 1% of the excerpt is approx. equal to 54 thousand adult Bulgarians.