Gallup International > Publications > International Politics > Elections around the World are Considered Free and Fair. However, Elected Governments are not Fully Recognized as Governing by the Will of the People

Two out of five people around the world agree or somewhat agree that their country is ruled by the will of people. However, more than a half of those surveyed disagree. When it comes to elections the results seem to be upside down – about half of those surveyed agree or strongly agree that in general the elections in their country are free and fair and just above 40% disagree.

These are some of the results of the latest global Voice of the People (VOP) research, conducted by the Gallup International Association at the end of 2021. This survey on democracy covers 45 countries around the world, with about 42,000 adult citizens, representing about 2/3 of the global population. Over the last seven decades the Gallup International Association has been tracking on a regular basis people’s perception on governance and fairness of the elections.

Democracy in Governance around the World 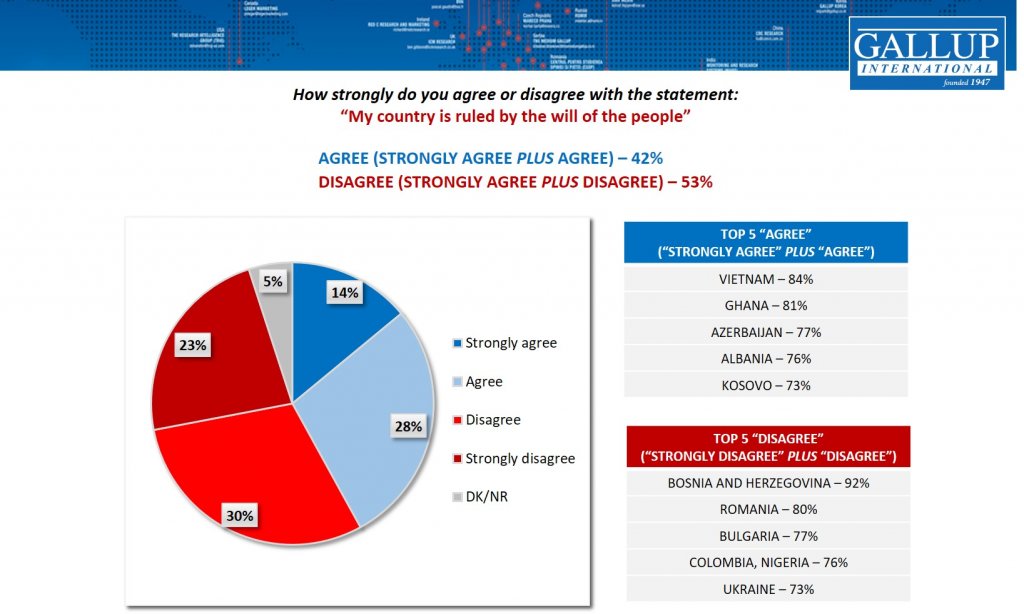 Across the globe attitudes on this matter seem to be consistent with the 2020 survey. India and Asia (especially eastern parts of the continent) stand out among regions and large countries by expressing a higher level of confidence in governance by the will of people. 64% of the respondents in India and just over a half of those surveyed in East Asia agree or strongly agree that their country is ruled by the will of people.

Most prominent dissatisfaction with the democratic nature of their governance at the regional and among the major powers is expressed by people in Russia and USA, and also in Europe and Latin America.

As mentioned before in GIA’s VOP survey analyses there is a notable difference in societal expectations for democracy defined by different cultural backgrounds, political systems, national histories, current political situation, etc. Those conditions could affect the extent to which different societies are prone to criticizing their governments. 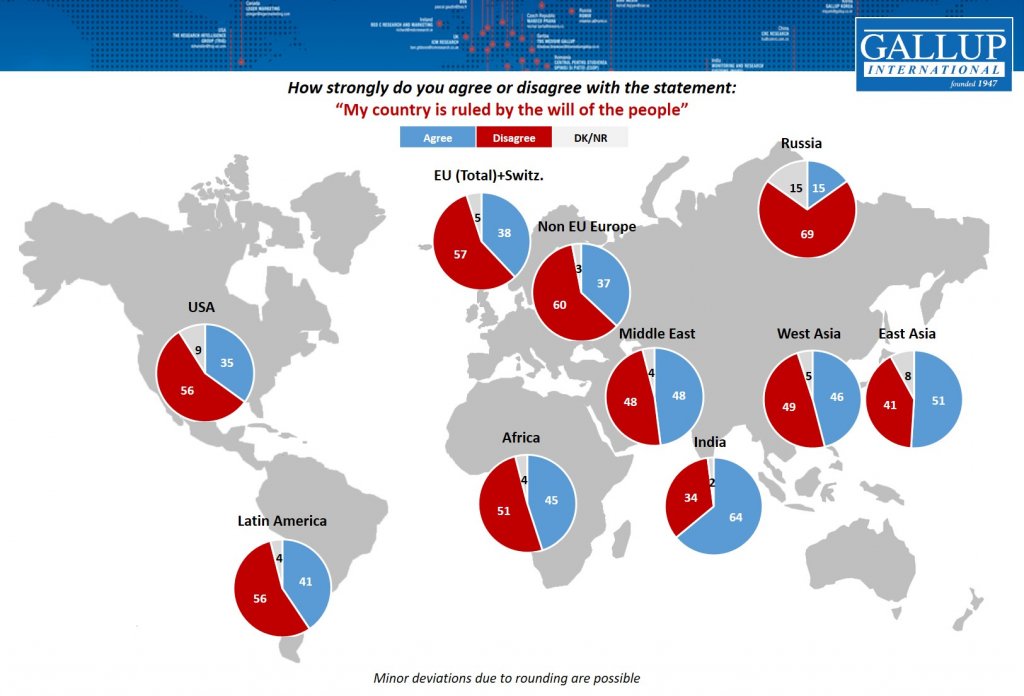 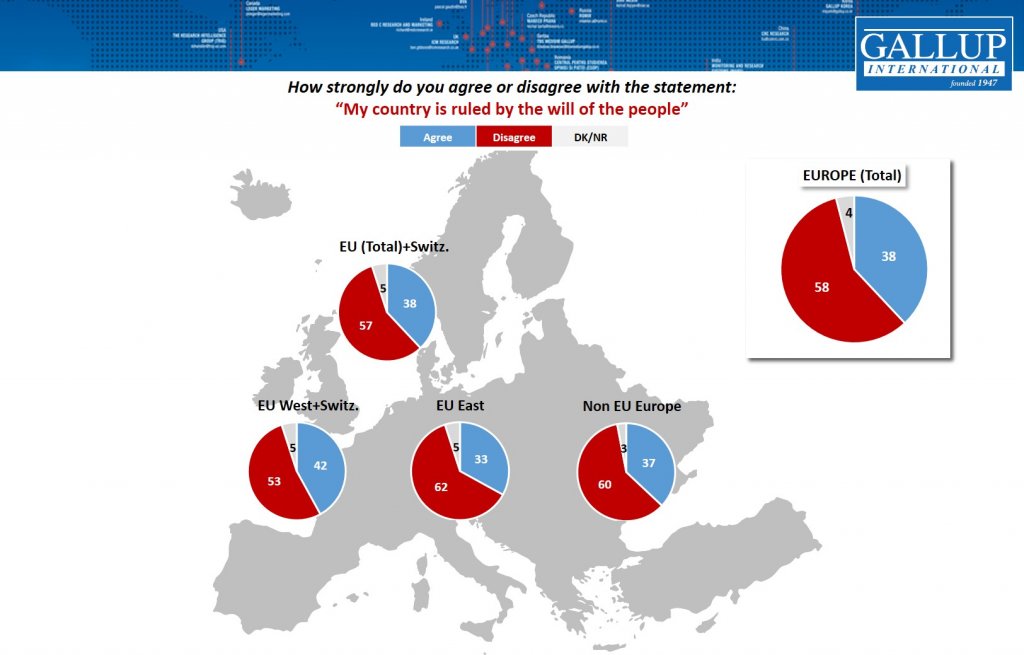 People in Vietnam (84% agree or strongly agree), Ghana (81%), Azerbaijan (77%), Albania (76%) and Kosovo are most confident in the democratic nature of the governance of their country.

On the contrary, citizens of Bosnia and Herzegovina (92% disagree or strongly disagree), Romania (80%), Bulgaria (77%), Columbia and Nigeria (both 76%) and Ukraine (73%) are most critical towards the actual workings of democracy in their country. 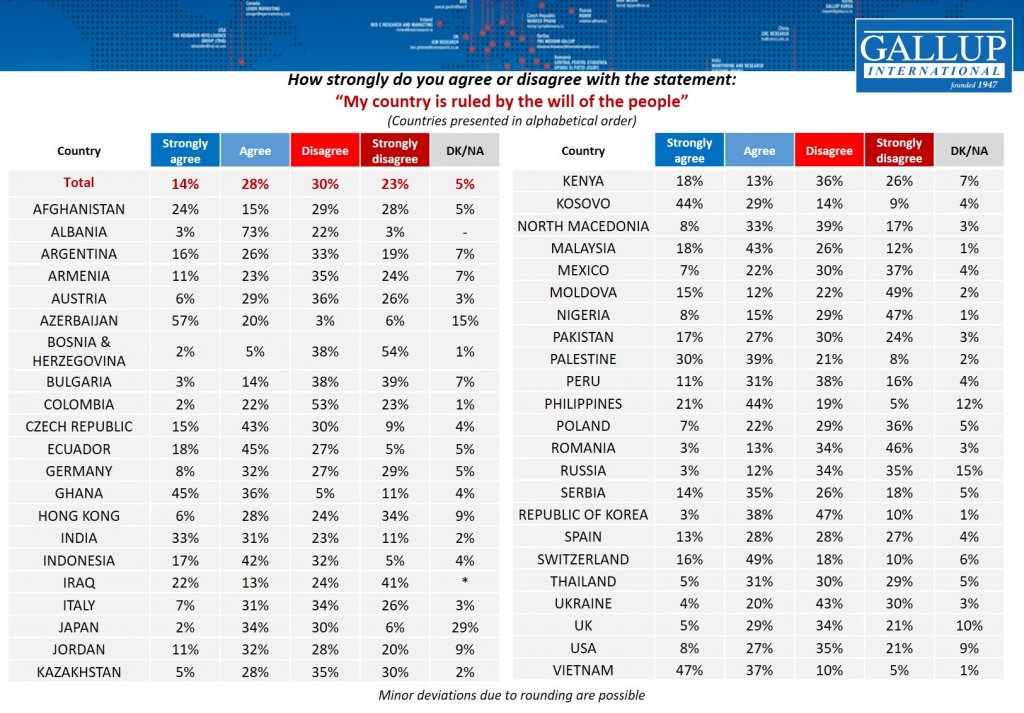 Just above the half of the surveyed people around the world consider the elections held in their country free and fair. 43% think the opposite and 5% cannot form an opinion. 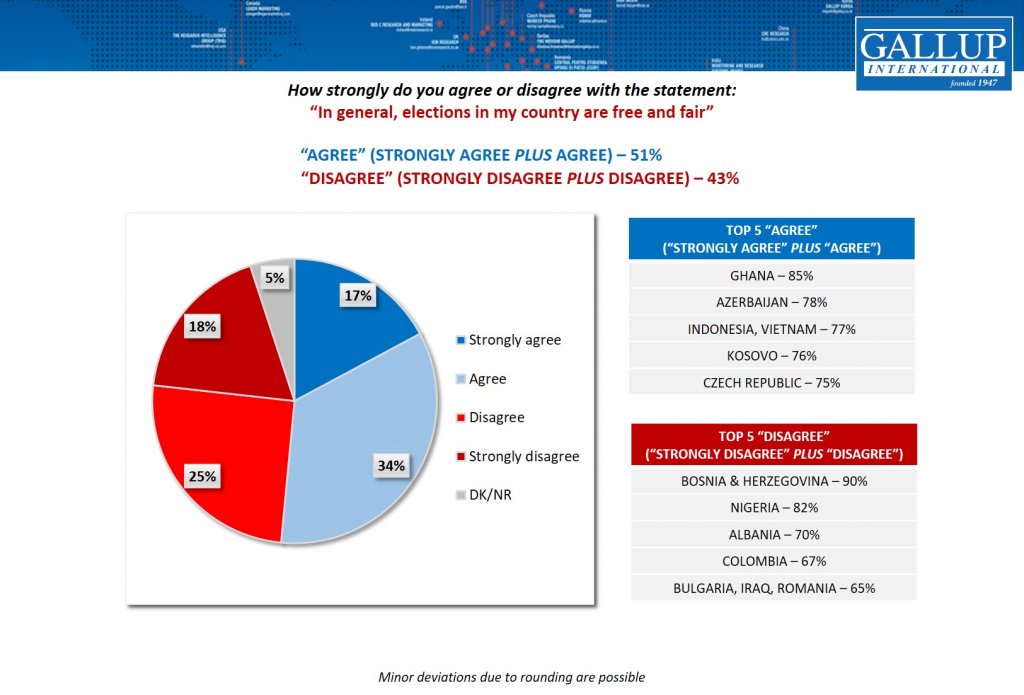 Among the larger nations and regions, people in India again are most certain in the freedom and fairness in the elections in their country – with 73% share of affirmative answers – followed by EU and East Asia. Fairness of the elections is most doubted in Russia (59%), the Middle East (51%) and European countries outside of EU (52%). 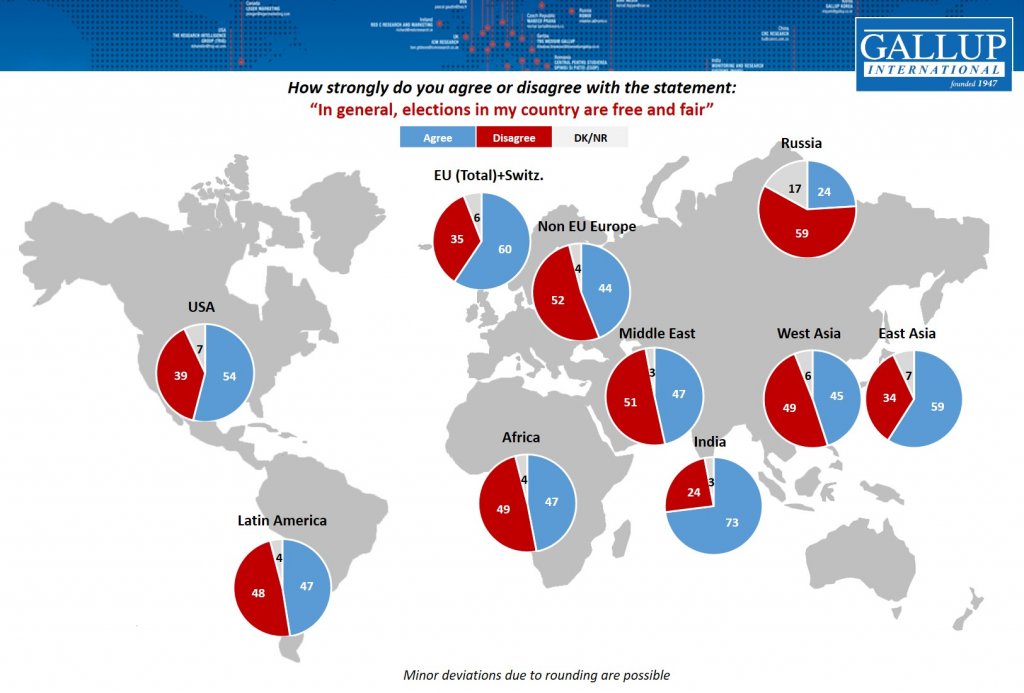 Interestingly, while European citizens (both in EU and Non-EU countries) express rather strong concern about the democratic nature of their governance, they do not share the same attitude towards elections in their country. In the EU for instance, two-thirds of the respondents believe that the elections are free and fair and a third disagree. The confidence in the democratic behaviour of the elected governance however is not so wide – 38%. 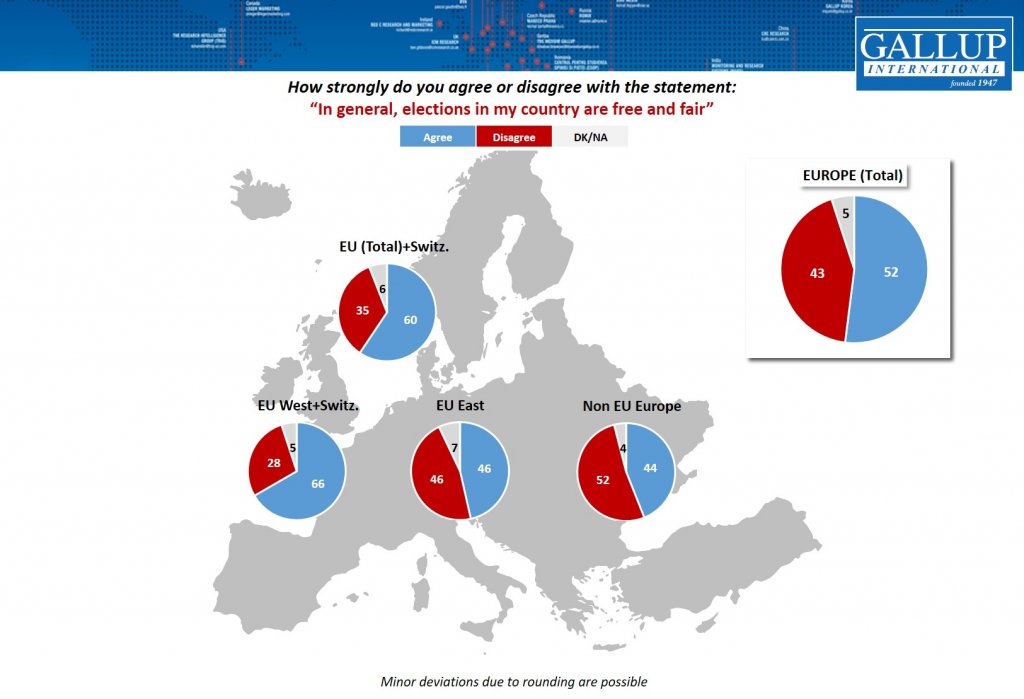 Most satisfied with the freedom and fairness of the elections are people in Ghana (85% agree or strongly agree that the elections there are free and fair), Azerbaijan (78%), Indonesia and Vietnam (77%), Kosovo (76%) and Czech Republic (75%).

People in Bosnia and Herzegovina (90% disagree or strongly disagree with the statement that the elections are free and fair), Nigeria (82%), Albania (70%), Colombia (67%), Bulgaria, Iraq and Romania (65% in each country) express most concern about the elections in their country. 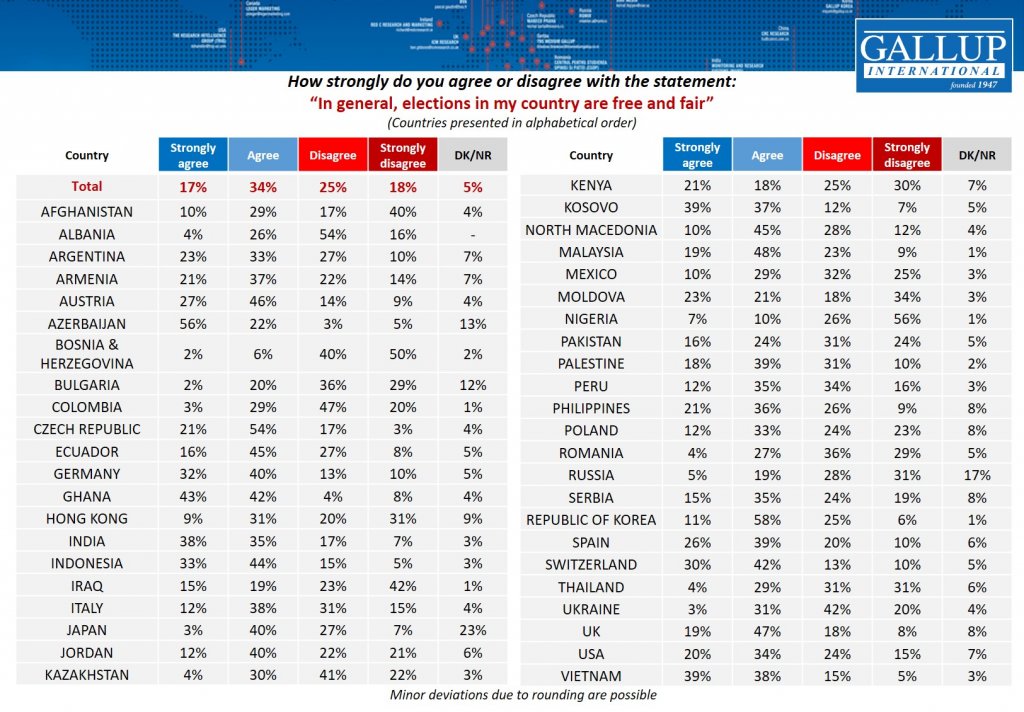 The Voice of the People Index developed by the Gallup International Association combines people’s attitudes towards both statements “My country is ruled by the will of the people” and “In general elections in my country are free and fair,” reflecting perceptions on essential democracy values. 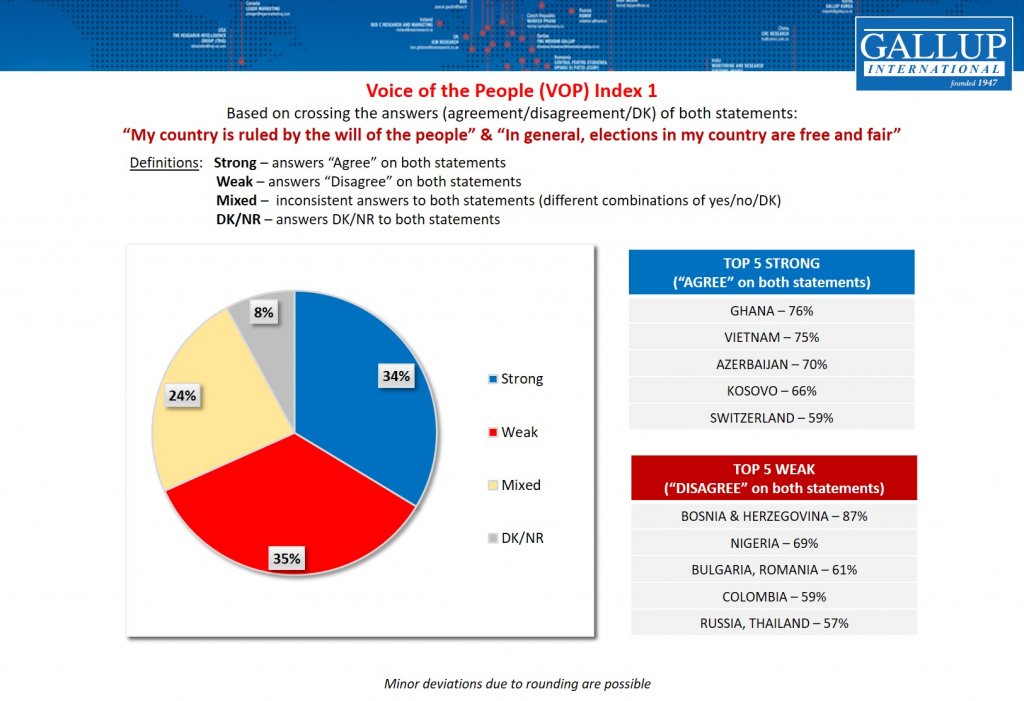 According to the VOP Index 34% of those surveyed around the world live in conditions of strong democracy, meaning that they agree that their country is ruled by the will of people and that elections in their country are free and fair. 35% of those surveyed worldwide live in conditions of weak democracy, where neither the elections are considered free and fair, nor is the governance considered democratic. And a fourth of the respondents live in a country where one of the conditions for a strong democracy is not met. 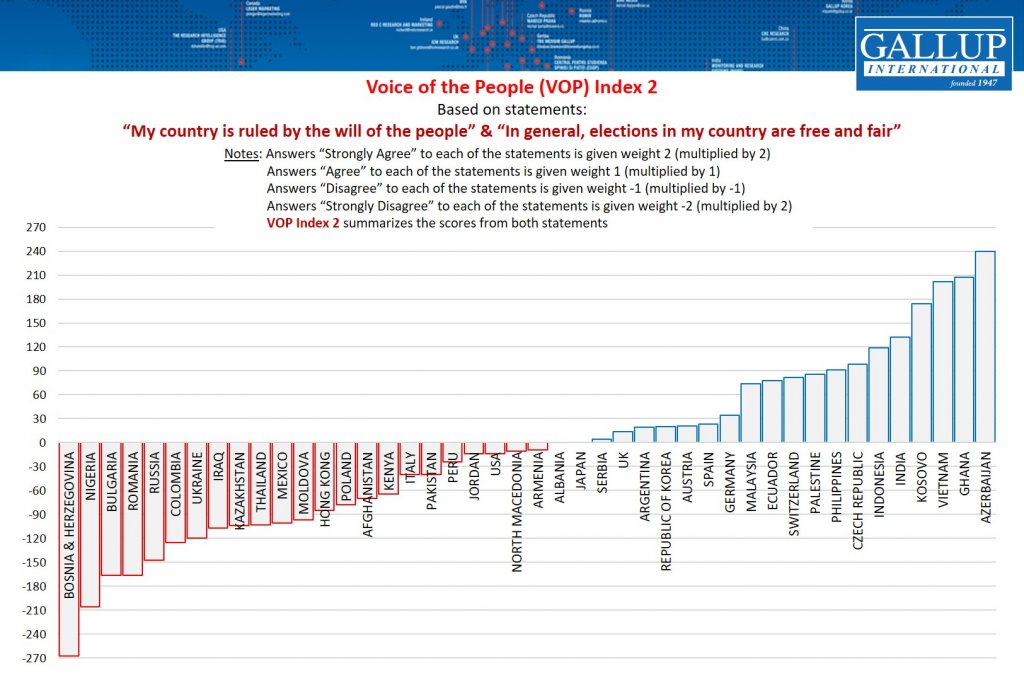 “Taking into consideration first the fact that among more than a quarter of the global population (China, many countries in the Middle East, some in Africa) pollsters are not allowed to conduct public opinion studies in a free and independent way and second – that more than a third of the voters in countries considered as democratic believe that in fact democracy is not functioning properly in their country, we can conclude that we live in a World where democracy does not prevail. The globalisation of democratic values and practices has evidently stopped and a reverse process has begun. It seems that globalisation cannot be restarted in a World which is politically so inhomogeneous and may even be reverting to the so-called Block system.”

Implication: last year’s multiple elections did not leave the Bulgarian citizens with the impression for an increased democracy

Bulgarians are traditionally skeptical about their own government. In implication, right after the rather turbulent recently passed period of political instability -17% declare agreement with the statement “My country is ruled by the will of the people”, unlike 77% who give negative answers.

Our population is by tradition one of the most critical when it comes to the democratic nature of the government. In comparison with the previous wave of research, the attitudes towards the issue remain mostly steady and seem even more critical. The wave of the research – in a few moths- will show whether the year of 2022 until now has provoked a positive change in those principled views. 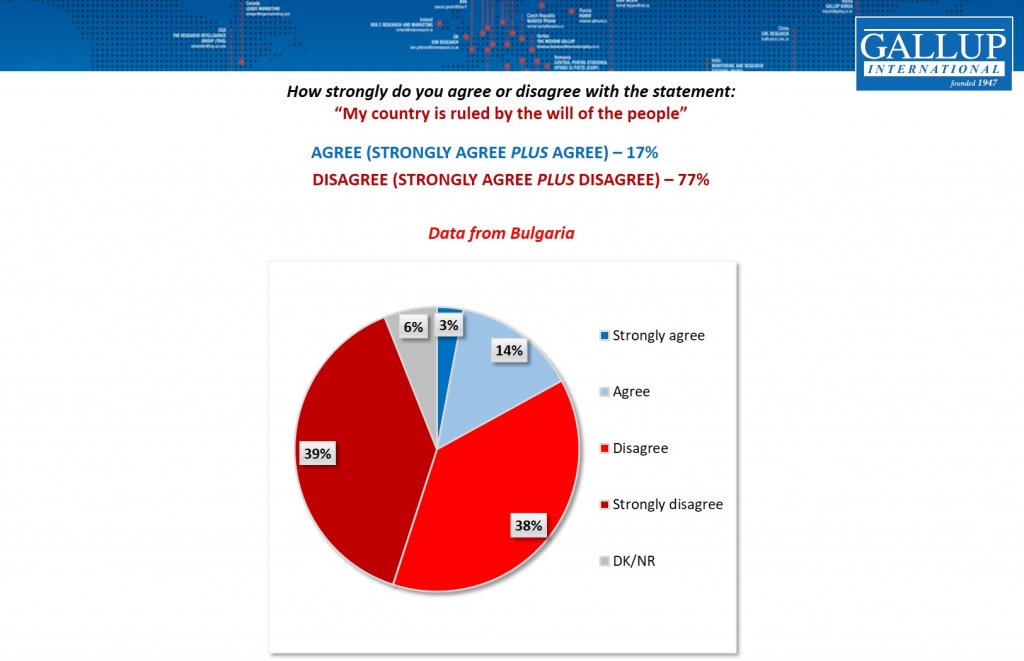 When it comes to the question of free and honest elections, the perception of the Bulgarians is respectively rather propitious, even though our society is once again one of the most critical ones. 22% of the interviewed consider that the elections in our country are free and honest, unlike 65% who support the opposite opinion. 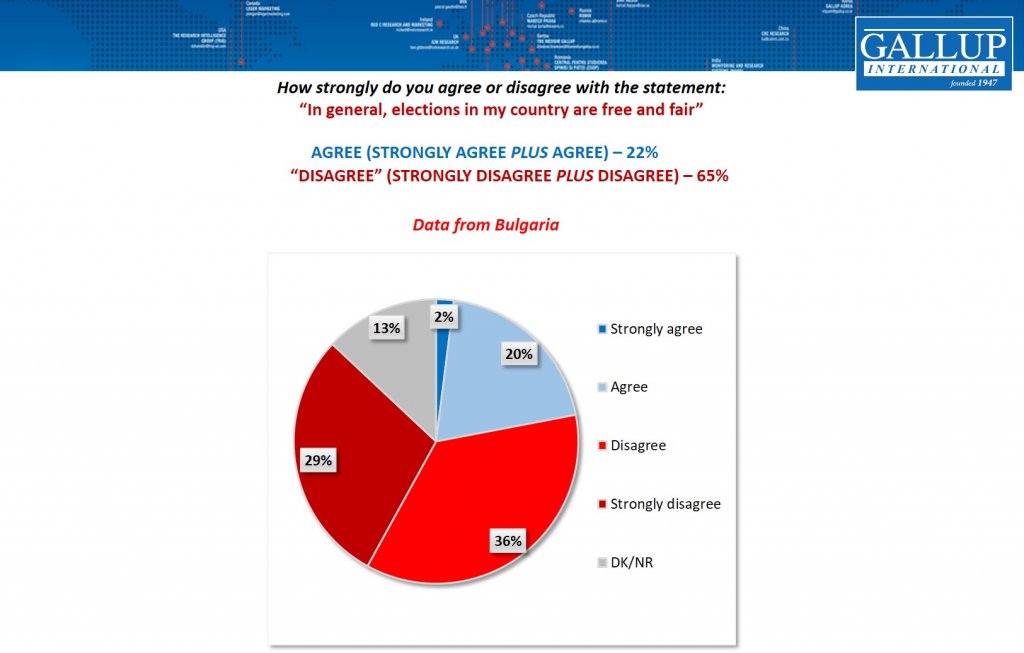 So, following both indicators our country seems to be going more to the deep end of the scale, expressing dissatisfaction both to the main mechanism of the representation of the democracies (the elections) and to the principled character of the establishing authority itself.

It seems that the discontentment from the governance, which is not lead to a sufficient level by the will of the people, is perhaps more expressed in the eastern EU countries, with whom our country demonstrates similar results. Our attitude towards the way of holding the elections is rather clearly way more negative considering the EU in total, moreover, the Eastern countries of the Union, which usually display similar to our attitudes.

It should be however considered that the three consecutive parliamentary elections in our country last year, which provoked more than once changes in the electoral codex, have probably affected additionally the people’s views in a negative way.

Despite of the political instability in our country in 2021, GIA’s VOP Index (Voice of the people Index) traditionally puts our country in the negative corner of the scale. This year 13% of the Bulgarians consider that we live in conditions of increased democracy, 12% say that our country’s governance does not respond to one of the democratic conditions and 2/3 (two-thirds) consider the level of democracy being rather weak. 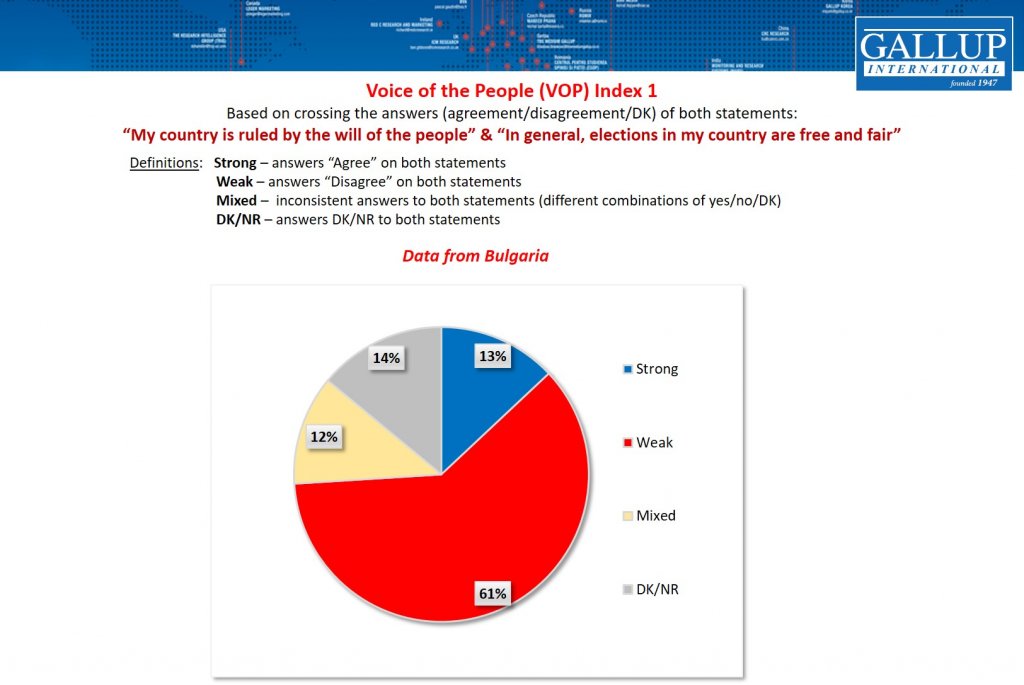 These poll results are part of the Gallup International Association’s 2021 End of Year Survey (EoY). EoY is an annual tradition initiated by and designed under the chairmanship of Dr. George Gallup, Sr. in 1977. The survey has been conducted every year since then. This year it was carried out in 45 countries around the world.

▪ USA, India, Russia and Australia are not included in any other regional category

About 42,000 persons were interviewed globally. In each country a representative sample of approximately 1,000 men and women were interviewed during October-December 2021 using face to face, telephone or online methods as appropriate for each country under the conditions of the COVID-19 pandemic.

The margin of error for each country’s survey is +3-5% at the 95% confidence level.

*Due to political, religious and/or sociocultural considerations, in rare cases certain questions or statements are not asked in each country.

For 75 years Gallup International members have demonstrated their expert ability to conduct multi-country surveys on a comparable basis and deliver the highest quality. Our more than 100 members and partners are carefully selected by the Association Board and are leading national institutes with a profound local knowledge of research methods and techniques, statistical sources, and the customs and culture factors affecting research. With only one member agency per country, members work together on a daily basis to share knowledge, new research techniques and tools, as well as to provide the most appropriate solutions to international research projects and provide world-class service our clients. 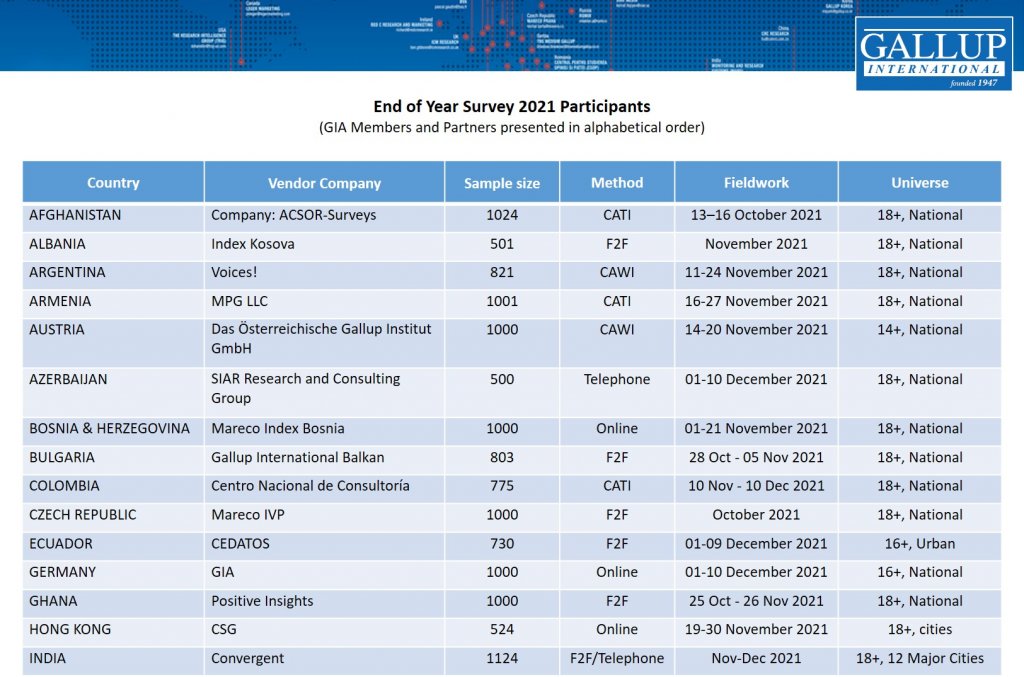 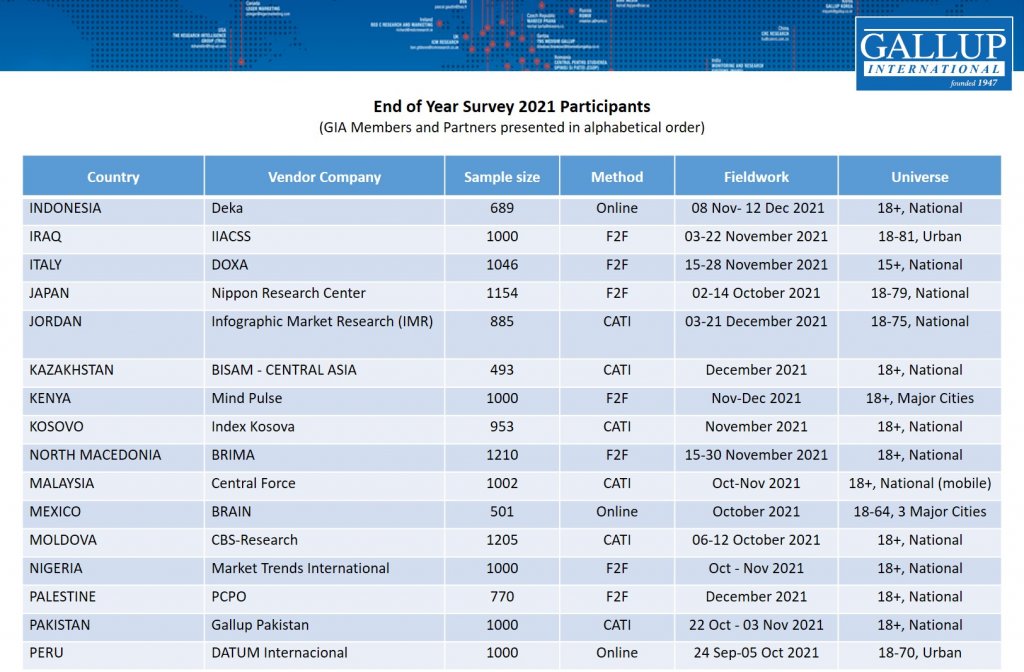 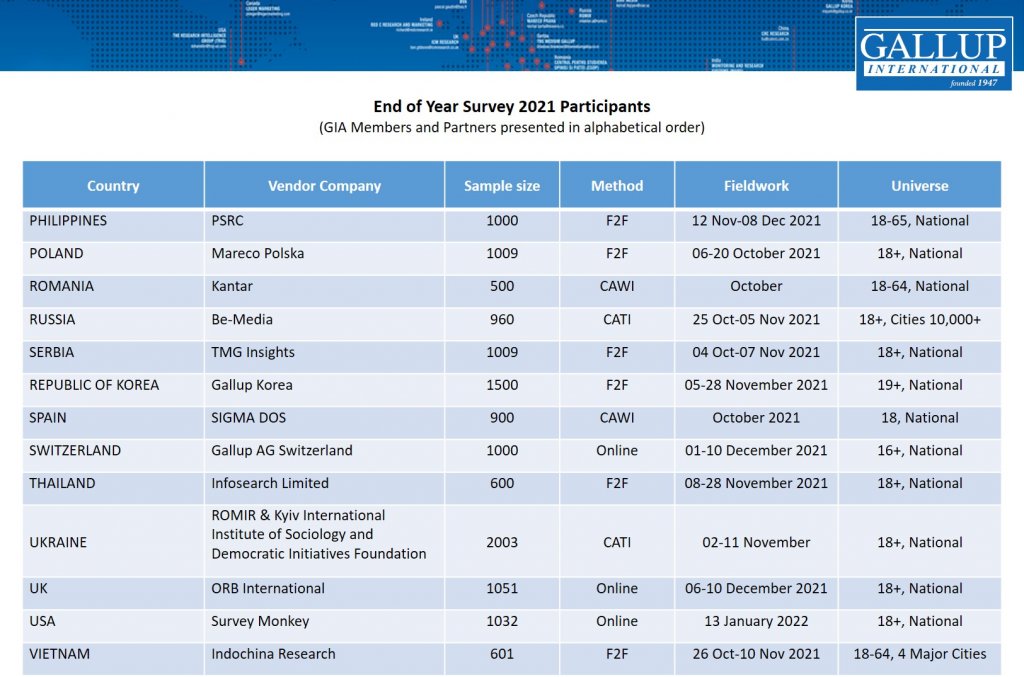