Gallup International > Publications > Culture And Education > More fake news, higher confidence in the public television and overall skepticism towards the news from the war in Ukraine

In the context of the Russian invasion in Ukraine, the influence of fake news in Bulgaria grows and the Bulgarians are sensibly skeptical of the information about the war delivered to them by media. From all sources of information, television is the primary one, and among all the TV channels in Bulgaria, the public television is considered the most unbiased one. Public broadcasting compensates the higher ratings of private operators with a more sensible trust from the audience. An independent poll of the information media has established the former conclusions, and more.

58.8% of the Bulgarian population claim that they would rather disapprove of Vladimir Putin’s actions in Ukraine. 23.3% of the respondents, however, do not hide that they would rather approve of those actions. The latter group comprises more elderly people, hence supporters of political powers that are traditionally pro-Russian. Similar structure of opinion was registered in a similar question in a previous survey of Gallup International Balkan. It is possible that those responses display some social desirability as well as concealed support for the war actions. Further survey about those topics is needed to quantify the possibilities.

At the same time, 50.7% of respondents reckon that the information presented by media in Bulgaria is rather untrustworthy. 25.9% selected the response “Rather trustworthy”. The remaining respondents are unsure. The data shows an alarming lack of confidence in the media although the responses to the question may also display the traditional skepticism by inertia.

The responses of the most elderly show a greater reliance on information from the media, which evidently corresponds to a more traditional perception. This, however, raises certain concern about the potential levels of awareness among the most elderly towards potential misinformation.

Within that context, 35% testify that they see news that may be considered fake, every day or almost every day. 24.1% observe fake news several times per month and 11.3% – at least once per month. More rarely fake news have been observed by 8% of the respondents, and around one in five is unsure about the frequency of observation.

Four years ago, the Gallup International Association carried out a similar comparative survey including Bulgaria. Comparing with data from previous years clearly shows that if now the share of everyday observation of fake news is 35%, it has risen by 12% from the last registration. The share of more rare observations is going down. There is also a decrease in the grey area of respondents who cannot give a definite answer. Evidently, as time goes by, the consciousness about this problem grows and so does the societal perception of its emergence.

Clearly, only two points in time do not suffice to propose a trend. However, the sensible perception of fake news emerging more frequently is a sufficiently alarming symptom.

Watching television remains the primary source of information – 53.1% of respondents place television at the first position. Immediately after comes the online social media – 22.3%. A further 16.6% indicate other websites as their go-to. Listening to the radio and reading newspapers remain a long way down the list. Among the young groups, social media has already become a definite number one, seconded by the other web pages.

Overall, Bulgarian media is preferred to the foreign ones – 39% say that Bulgarian media are a true source, while 28.3% would prefer the foreign ones. Noteworthy is the share of the uncertain respondents – 32.7%. The last piece of data means either that the respondents truly do not have an opinion on that question, or that the confidence in the media environment is generally unstable. 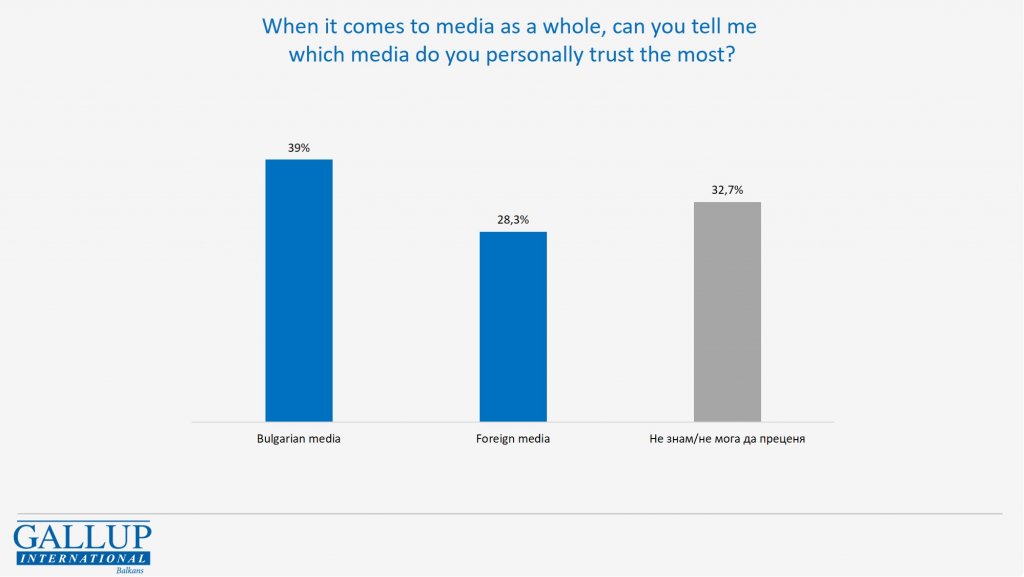 When it comes to the confidence of the audience, public media in Bulgaria evidently manages to have a “score” equal to the one of the private media with practically equal shares of 33.8% and 35% of viewers choosing the former or the latter type of media. This is serious news in the context of private media have an ostensibly larger outreach and possibilities. The national television and radio apparently manage to keep an impression of trustworthiness in the context of the market economy.

An additional indicator in this direction is the potential preference for the ownership of media – Bulgarian ownership is preferred (35.5%) to the foreign one (27.9%), whereas here the share of the uncertain responses is most evident (36.6%).

The survey was conducted among 1003 Bulgarian citizens of legal age, between the 2nd and the 10th of June, 2022 – through a direct semi-standardized face-to-face interview, using tablets, within a two-step random sample, representative for the population of the country of legal age. The data is a part of an independent monthly research program. The possible deviation is +-3.1% at 50% shares. 1% of the sample corresponds to approximately 54 thousand Bulgarian citizens of legal age.