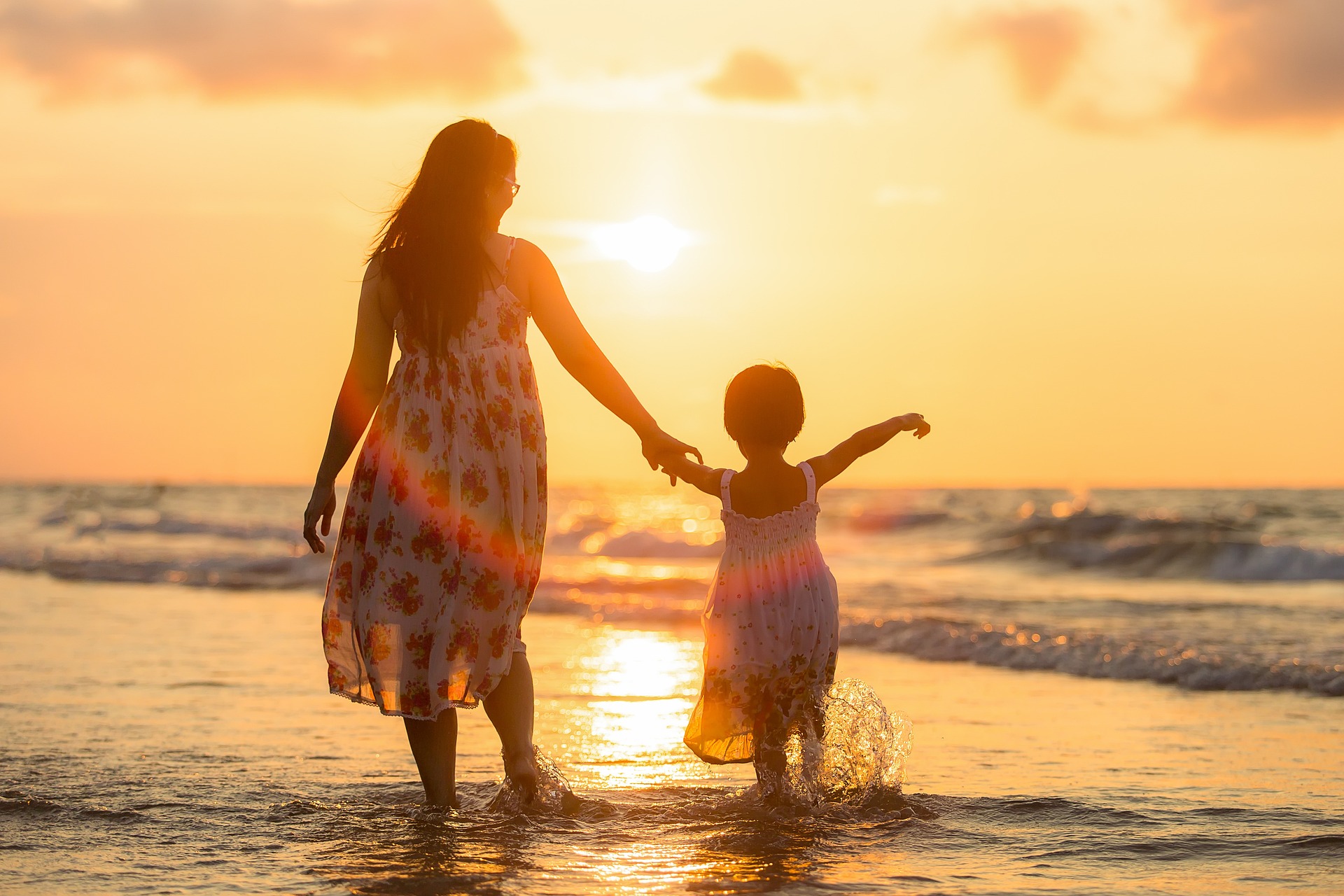 Every second citizen (51%) of the world believes that their life is better than that of their parents. The other half of the people asked is equally divided between those who assess a worse life (23%) and those who find it the same (23%). 3% could not answer. Satisfaction with the living standard is a key factor for people to believe that they have a better life than their parents. But in some rich regions like Europe this is not so valid.

Expectations for the life of today’s children are predominantly good as well but lower than the comparison of own life to the life of the previous generation – 44% are expecting a better life for today’s children in comparison to our lives, 28% expecting a worse life, 20% expecting about the same and 8% not responding. Aged people are less sure about the better future of the next generation. More money unsurprisingly seems to result in more confidence in the future on a personal level, but on a national level countries that experience or used to experience difficulties are the ones to believe stronger in better future for the next generation. Unsurprisingly again. 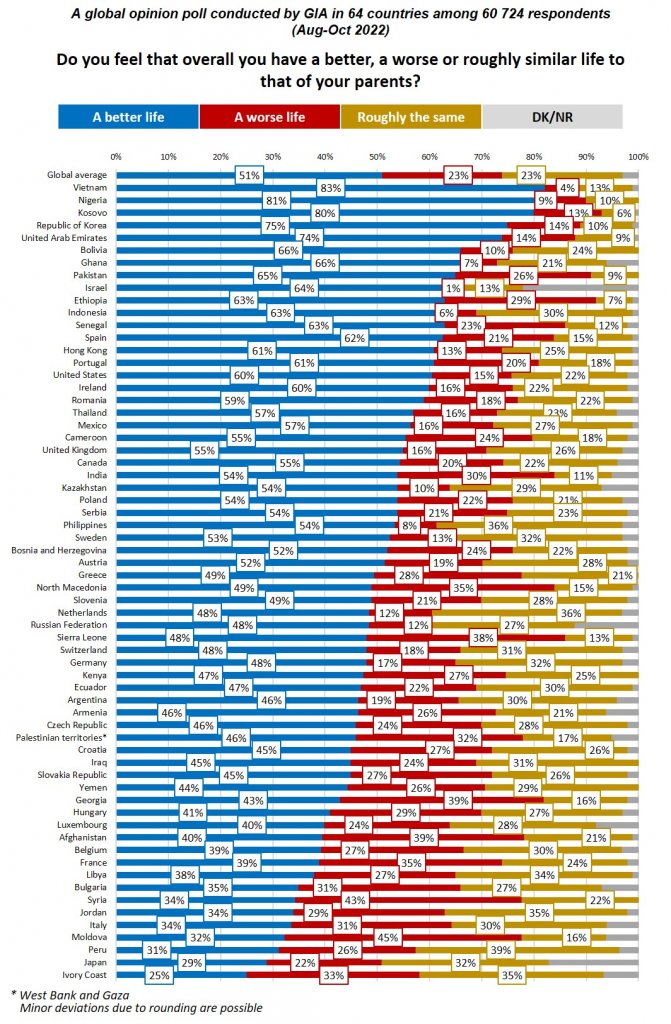 This is the picture from the special poll conducted by Gallup International Association (GIA) in 64 countries covering over two thirds of the global population (and more than 90% of those countries which are free to conduct and publish opinion research). The poll celebrates GIA’s 75th anniversary.

When asked if they now have, overall, a better, worse, or roughly similar life compared to that of their parents, globally 51% report a better life, 23% worse, 23% about the same, with 3% not answering (Refused or Don’t Know). When rounded, globally there is nearly 30 points spread between positive and negative views on the inter-generational trend in wellbeing.

As we would expect, results vary across groups defined in terms of household income, education etc. For instance, lowest household income groups reveal positive assessments, but these are rather low (42% “better”, 29% “worse” or 13 points) compared to groups with highest quality of life (62% “better”, 16% “worse”). Most educated people are more positive (33 points) than less educated people (16 points) too. Despite this general pattern results prove to be country-specific, depending on various historical contexts, etc. 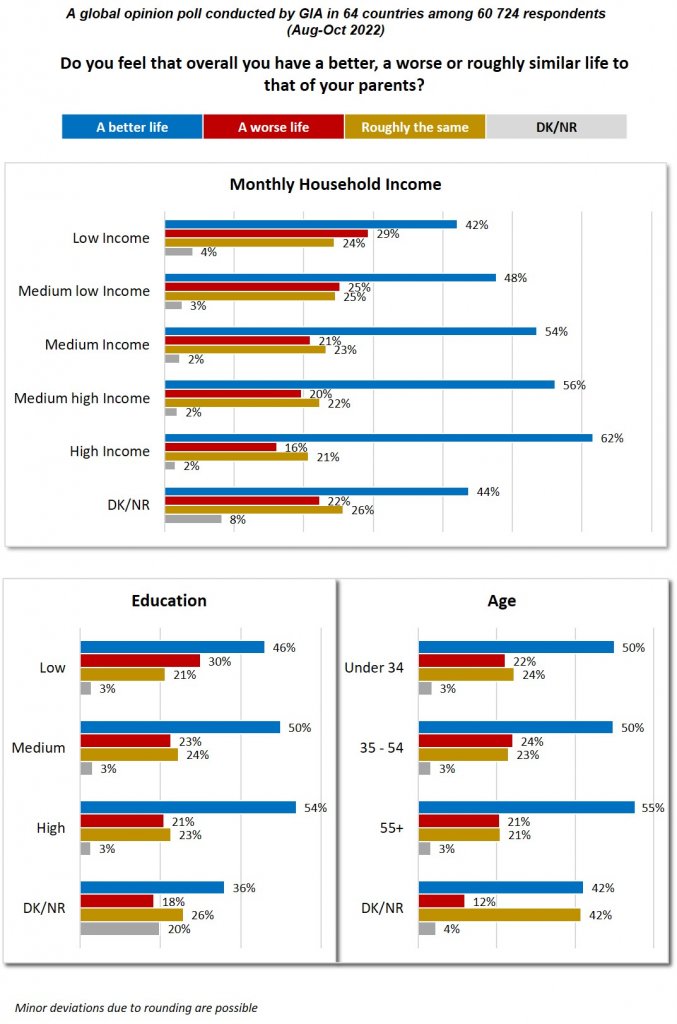 When asked about today’s children lives, compared to our lives, opinions globally were marginally less positive, with 44% expecting a better life for their children, 28% expecting a worse life, 20% expecting about the same and 8% not responding. Thus, across the globe, there is a 16-point spread between positive and negative expectations about the lives of children today. Expectations for the generation seem less positive than comparison to the previous one. However, given all of the challenges we are facing (war, inflation, pandemics, climate change) this level of positive expectation is a kind of a positive surprise. 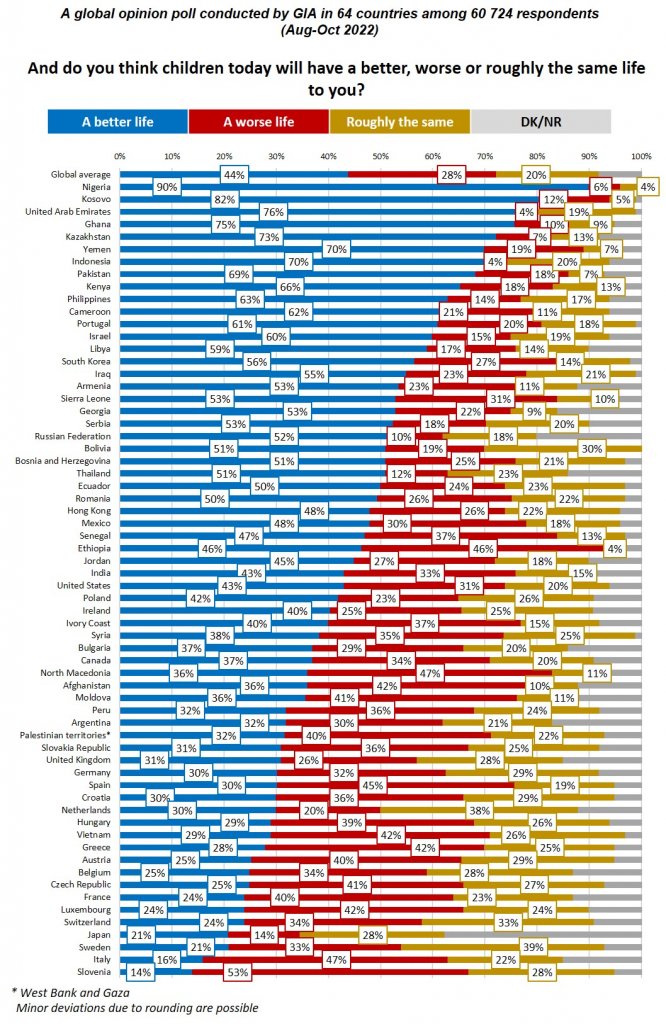 The older the respondents, the less sure they are on today’s children prospects. For instance, in the 55+ age group the structure is as follows: 39% “better” minus 31% “worse” and a relatively small spread – compared to a significant 22-point spread (48% vs 26%) within under 35 age group. Due to intergenerational dialogue problems, concerns for tomorrow’s world or whatever, there seem to be a gap between past and future in the older generation’s opinion. 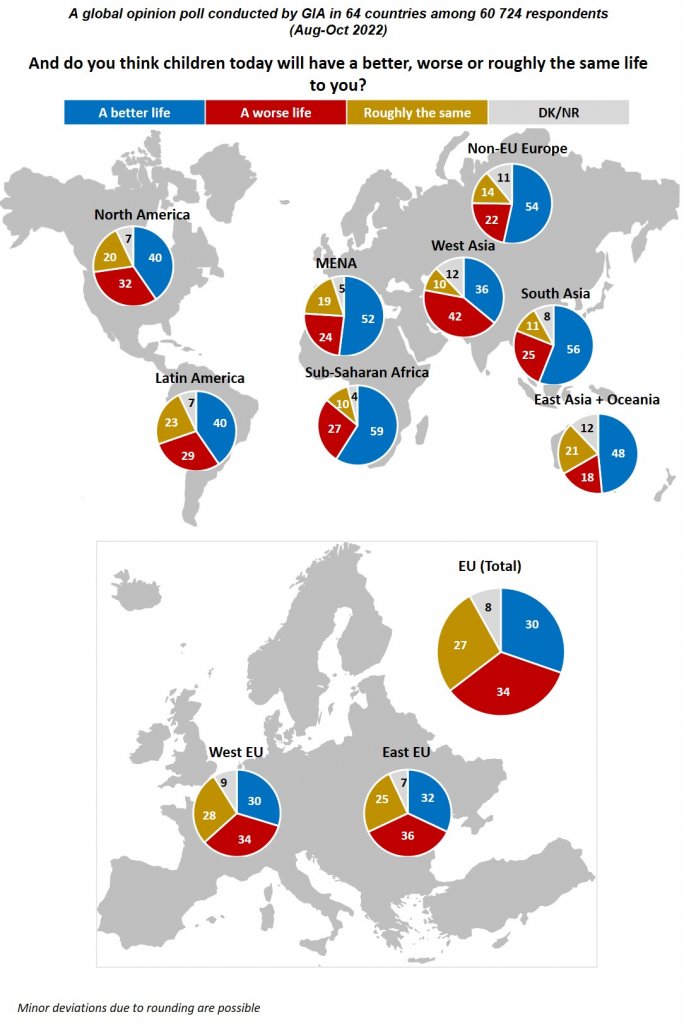 When combining the two questions, another perspective is added. For instance, Moldova shows a total of 86 (45% saying that their live is worse life than the one of their parents plus 41% expecting a worse life of today’s children), followed in this negative ranking by North Macedonia (82: 35% negative assessments plus 47% negative predictions), Afghanistan (81), Syria and Italy (78), etc.

Most of the countries are still positive on both questions, but if one looks for instance for countries with both above 50% positive answers, Nigeria stands out with 171 (81% positive for today plus 90% positive for tomorrow), followed by Kosovo (162), the United Arab Emirates (150), Ghana (141), Pakistan (134), etc.

Findings are proved, confirming that developing parts of the world share more hope. National and political peculiarities leave their footprint but in general is seems that the closer the war and troubles are, the worse are the answers on both issues – as expected. 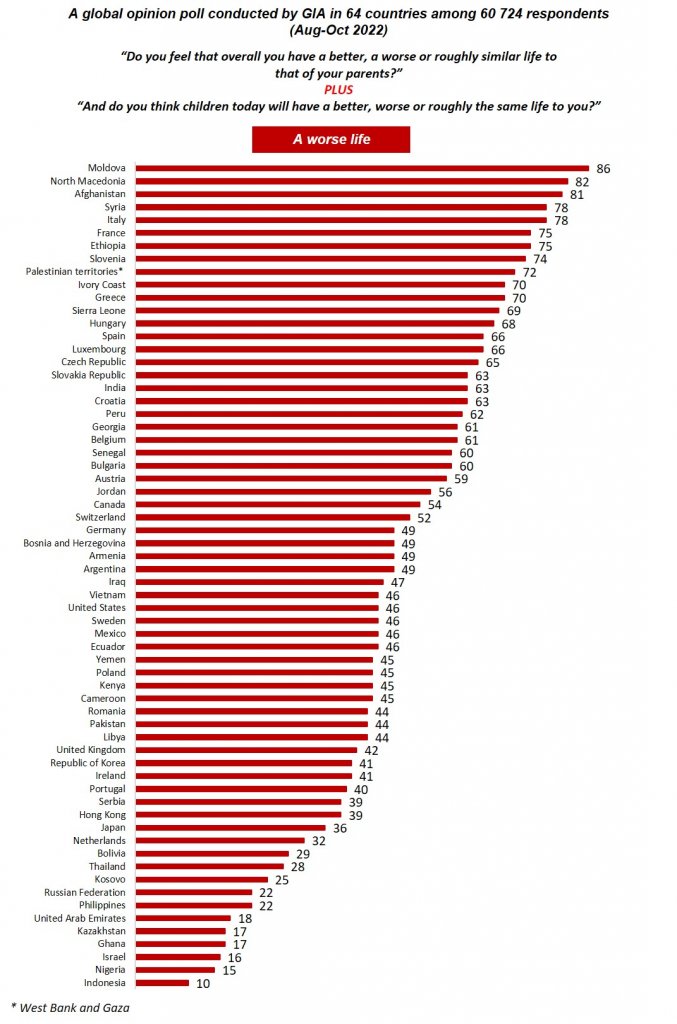 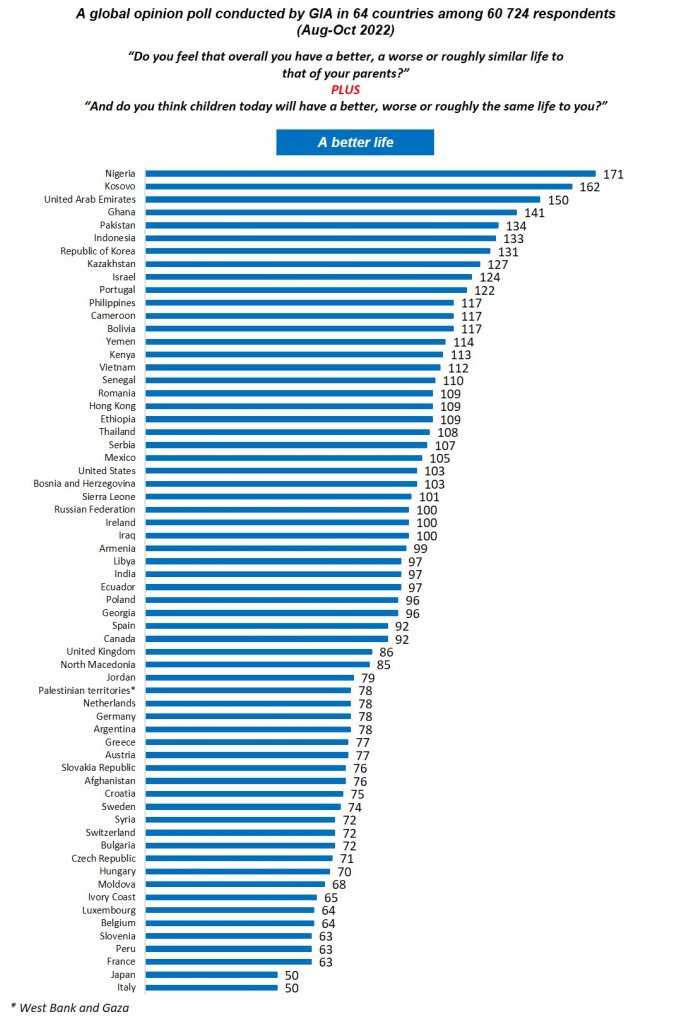 “A widespread modern belief suggests that we will live better than the previous generation and that the next one will live better than us. But imagine the opposite: that we live worse than our parents and in addition our kids are going to have a life worse than ours. That means two generations with a declining quality of life. And while such a majority mood looks relatively easy to explain for countries like Afghanistan, Moldova, North Macedonia and Syria, for France and Italy it is a real challenge to do it. But despite the significant difference in the explanations, what is common in both cases is the perception of a life crisis. That is why it seems that the combination of those two questions is mapping the citizens on the scale of actual satisfaction with life in every one of the 64 countries surveyed”.

A total of 60,724 persons were interviewed globally. In each country a representative sample of around 1,000 men and women was interviewed during August-October 2022 either face to face, via telephone or online.

For 75 years Gallup International members have demonstrated their expert ability to conduct multi-country surveys on a comparable basis and deliver the highest quality. Our more than 100 members and partners are leading national institutes with a profound local knowledge of research methods and techniques, statistical sources, customs and culture differences of its own country and carefully selected by the Association Board. With only one member agency per country, members work together on a daily basis to share knowledge, new research techniques and tools, as well as to provide the most appropriate solutions to international research projects and service our clients to the best of our abilities.